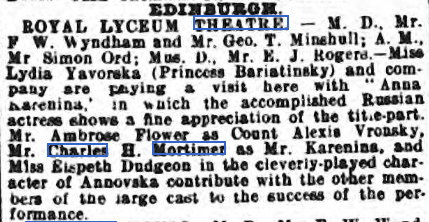 Mme. Yavorska herself, despite her alien lilt, was always understood. Mr. Ambrose Flower had a little of the tenderness and the courtly reverence of Count Vronsky—his elder brother Alexander evidently belonged to a family of different breeding. A throng of minor Russian folk - excellent satirical sketches in the novel—pass in and out of the scenes —Mr. George Owen as Prince Stiva in an exaggerated but amusing comedy manner, Mr. Charles Mortimer as Karenin in the good old-fashioned and misguided heavy style, and Mr. Edward Stirling as Prince Cherbatsky. Miss Cholmondeky the Countess Lydia, and Miss Margaret Vaughan, charmingly simple as the girlish Kilty, were the best—most of the others were only the shady side of moderate.
Liverpool Echo - Tuesday 17 November 1914

"Mr Charles.H.Mortimer furnishes a fine study of the wronged husband."