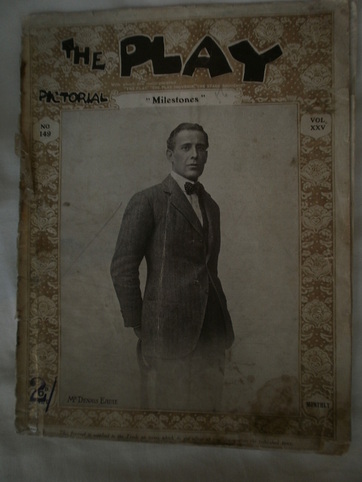 "Patrons of the Theatre Royal, Exeter, will next week again have the opportunity of witnessing that remarkable play, "Milestones", which will be staged by the Taylor Platt and Wilfred Eaton Company. The cast, which is a strong one, includes John McNally, Charles.H.Mortimer, Percy Taylor, J.L.Playfoot, J.Kilmer, Joseph McGrath, Frances Waring, Aubrey Ashton, Valerie Richards, Gladys Head, and Peggy O'Hara."

"Mr Charles.H.Mortimer, is quite at home as Sibley, both as the young man who scorns the idea of the ironclads, and the middle-aged, successful retired business man."

Patrons of the Palace Theatre, Gloucester, will again have the opportunity of witnessing this remarkable play. "Milestones," by Arnold Bennett and Edward Knoblock, which will be staged by the Taylor Platt and Wilfred Eaton Co. next week. It is a wonderful play, besides possessing the charm of novelty, its characters breathe real life, and its situations are decidedly natural and well conceived. The scene is laid in London, and the date of each act 1860 —1885— 1912. The caste includes ; John McNally, Charles H. Mortimer, Percy Taylor, J. L. Playfoot, J. Killner, Joseph Magrath, Frances Waring, Aubrey Ashton, Valerie Richards, Gladys Head. Peggy O’Hara. Special Matinee on Easter Monday.