Continuing the once - nightly season at Dudley Hippodrome this week is a comedy-thriller, "Warn That Man.” and it proved a big draw last night. Its long run at the Garrick Theatre added to its appeal, a further attraction being the appearance of Gordon Harker in the leading role. The supporting company was a strong one and included Sydney King. Basil Radford, Judy Kelly, Charles Mortimer, Veronica Rose, and Stanley Groome.
​
From the Coventry Standard of 27 March, 1943.

The comedy genius Gordon Harker has an excellent opportunity for exploitation. "Warn That Man,” which is being presented this week at the Coventry Hippodrome, and he takes full advantage of it to give local audiences the delight of hearing and seeing and enjoying the rich humour for which he is famous. The play is packed with exciting incidents all the way through, and merely front the thriller aspect it would have great hold on an audience. Gordon Harker is more than comedy relief; he becomes the central figure whose actions the whole plot depends. The fact that in the process of foiling a gang of Fifth Columnists, he raises laugh upon laugh does not spoil the story but rather raises it to greater entertainment. The whole of the cast is first-rate, and the play is produced in fine style. 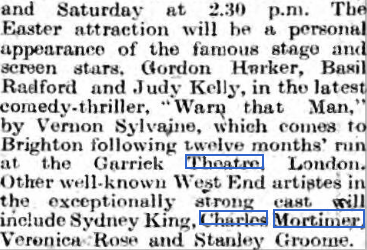 Mid Sussex Times - Wednesday 21 April 1943. The play was to be staged at the Theatre Royal, Brighton.