Charles Mortimer was in the cast of "The Gambler" at the Hippodrome, Huddersfield, in January, 1914, playing the villain. The play was presented by the Harry Foxwell Company. The cast also included Rosalie Notrelle and Stanley Healey.

From the Huddersfield Daily Examiner of 13 January, 1914.

THE HIPPODROME. What will certainly rank as one the best sporting dramas yet staged, more particularly twice nightly, is "The Gambler" which is being presented by Mr. Harry Foxwell’s Company at the Hippodrome this week. Sheila Walsh has gained an enviable reputation with her works that have been dramatised, but nothing has pleased the public more than this cleverly conceived sporting play. The piece abounds with thrilling incidents, and pathos and humour were nicely blended throughout. Dick Randall, spendthrift, after having fallen upon dark days, leaves home and wife to seek his fortune abroad, and, after passing through many vicissitudes, returns a wealthy man again. During his absence Peter Burton, a faithful servant, takes care of the deserted wife, who ekes out a somewhat precarious living by working in a shop. Not content with the trouble he has already caused, Captain Cyril Stanley, an unscrupulous man about town, aided by Lady Paula Ware, a society lady, seeks to bring about further ruin. In this, however, he does not succeed, and Dick Randall returns in time to make another fortune on the turf. Miss Rosalie Notrelle, as Helen Randall, is exceedingly clever, and gives a most realistic portrayal of a difficult part, while Miss Ethel Crawford, in the role of Lady Paula Ware, is responsible for some fine acting. The major portion of the work, however, falls upon Mr. Stanley Healey, in the part of the gambler, Mr. Dane Clarke, the butler, and Mr. Charles H. Mortimer, the villain. Undoubtedly the best scene is that where the three horses which appeared in the great race in the original production of "The Whip" at the Drury Lane Theatre, London, are shown galloping full speed on a mechanical racecourse.
According to the Era of 30 July, 1913, he was also appearing in this play at the King's Theatre, Longsight, Manchester. (below) 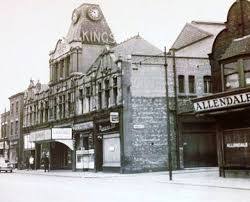 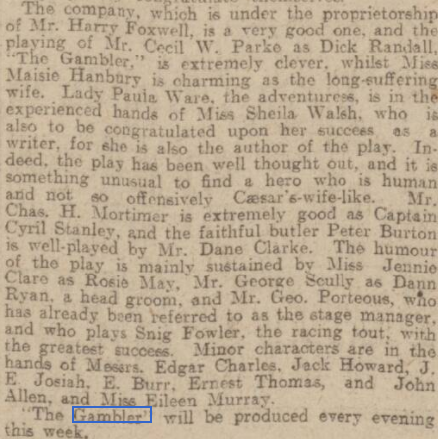 From The Derby Daily Telegraph 7 October, 1913