I wrote to Keith Baxter in April, 2019, asking for recollections of his work with my grandmother in this play. This was his reply.

First of all I am sorry that it has taken me such a long time to write to you about your grandmother and the play we were in, all those years ago in 1961.  I have been working in America and have only just got down to dealing with my mail..

I have very clear memories about the production of Time and Yellow Roses, though my contact with your grandmother was not very meaningfiul; she was not onstage during my scenes.  But of   course we met backstage and she was always very nice to me. "Oh, you're so young!" she would say as I galloped past her up the stairs.

The play had an interesting history.  Leslie Storm was a successful playwright who had had several big hits in the West End including
Black Chiffon in which Flora Robson had scored a triumph.   But the leading role in"Time and Yellow Roses" was not written for Flora Robson.  In fact it was not written for a woman at all.  The play was to tell the story of a mega-rich Belgian industrialist who had made a huge fortune in the Belgian Congo.  He had come to London to see his mother who was in an advanced state of senility, and suffering from dementia. He had a London address; the penthouse of a  luxury hotel (the Dorchester?) and the action of the play takes place in the main room overlooking Hyde Park. His mother is confined to a wheelchair and has a 24hour nurse - superbly played by  the Australian actress Madge Ryan, who played the role with  a wonderful no-nonsense humour.  Arranging to see his daughter he is confounded when she arrives to find that she is a deeply committed socialist with very radical views and  a  boyfriend who  is a left-wing French journalist. (The part i would play).  The daughter attacks her father; she confronts him with the atrocities committed by, or at least condoned by, Belgian industrialists. One of the worst of these men, and one of the richest, was her father.

The play was in the hands of Murray McDonald who would direct the play and produce it.

The script was sent to several leading actors: Laurence Olivier; Emlyn Williams etc etc.  They all turned it down.  Lesley Storm was deeply
depressed.  Then Macdonald suddenly had the idea that the leading role could be rewritten.  The Belgian industrialist has died and his widow (who had no real idea how her husband's fortune had been made, and what atrocities he had permitted) has come up to London from the   country where she lives to sign some business documents and she has brought her mother (who is disabled and senile) with her.  Then her daughter arrives with her boy-friend and tells her mother how her fortune had been made and that her father was in effect a war-criminal.

Flora Robson was a wonderful actress - I had seen her play Paulina opposite John Gielgud in The Winter's Tale in 1951 and before that, during the war she had been a film star - having a huge success as Queen Elizabeth I in Fire Over England - a film set in 1588 and the threat of teh Spanish Armada. (Also in that film was the young Laurence Olivier and the young actress Vivien Leigh.  Vivien was actually one of the investors
in TIME AND YELLOW ROSES).   Flora Robson was at the top of her game: she had just had a triumph in The Aspern Papers and she had been made a Dame.   She was thrilled to accept the play by her old friend Lesley Storm and work with Murray Macdonald as director and producers.

But it quickly became apparent that there was a big problem.   Flora was not at all poltical; Patricia Healey was a very good actress but fiercely socialist.  She and Flora had nothing in common.   And the spine of the play was the contention between them. Patricia came from a very different school of acting. Flora didn't understand her, and she didn't understand Flora..   Also Flora had grown up in a world where 'stars' were treated with a kind of respect; Patricia - though always polite of course - had worked in an environment where that sort of behaviour was
non-existent.   Rehearsals were not happy.  I was fine.  My role was well-written and my main scenes were with Flora who was always charming and easy.  But then I was quite happy with my role, which didn't have any deep political dialogue.  And Flora was a wonderful actress, with a beautiful voice and she was always very easy to act with. And she liked men.

The first intimation that it was not going to be plain sailing was when we got on the train to Aberdeen for the opening.  Flora, Patricia, Madge and I were travelling First Class. Flora was a heavy smoker.  Smoking was commonplace in those days.  The atmosphere in the compartment was not difficult but it was not easy either.  Flora was knitting something.  The wool was bright green.  Madge Ryan, making conversation, asked "What are you knitting?" and Flora replied sunnily "I'm knitting a scarf for the Mayor of Johannesburg. I met him a month ago and he is charming." Apartheid was at its height. I felt Patricia's whole body tense.

The play was a big success in Aberdeen.  Flora was a huge star.  Flora was in the centre of the line as we took our curtain calls.  As she stepped forward the applause and cheering was deafening..  She reached behind her and took my hand on one side and Patricia's hand on the  other and said "I present to you two new stars!"  I was very touched of course.

We rehearsed daily.  I often sat next to your grandmother  who  never had much to do.  "I just sit in that wheelchair and if I doze off it doesn't matter!" she said gaily.  I often used to get her a cup of tea and chat with her.  Most of the rehearsal time was spent with Flora arguing that Lesley had given her no argument to exonerate her character.  I remember she said in the middle of one rehearsal.  "I know my audience will be asking When it is Flora's turn?  The girl has her turn.  The boy has his.  But when is it Flora's turn? Where is my argument to refute these challenges form my daughter?"   So Lesley tried to explain that there was no argument to excuse what her husband had done.  I liked Lesley very much and she was in distress.  I took her for a drink in the bar.  "Oh Keith" she said "what she wants is not an argument, what she wants is a speech!"

Well Flora got her speech.  It was a good speech. It came at the very end of the play.  Flora had been to Africa and seen for herself that what her daughter had described was true.  But it was too late for any reconciliation for her daughter had died.  Flora delivered this speech alone onstage except for your mother listening in her wheelchair.  Flora spoke through a flood of tears. She spoke about the Congo and what she had seen.  She was suddenly interrupted by her mother who speaks for the first and only time in the play.  She says "It's a long way." Flora, thinking as all the audience were thinking too, that her mother meant Africa said  kneeling to her "A long way where mother?" and her mother said "To Tipperary."     This reply was so surprising, even shocking, to the audience that it was often greeted with a burst of laughter.  Or total silence.. And the curtain fell.

There were long discussions about Greta's line.  Should it be cut? Should it remain?   Many  of the company thought the line should be cut; but Flora - in my opinion rightly - said "Leave it in."

The play was not a success.  The critics were very influenced at that time by the Observer critic, Kenneth Tynan who had been to Berlin and seen Brecht and brought with him a determination to smash plays like Time And Yellow Roses.   Vivien Leigh came and we had supper and she thought Flora had given a great performance.  Could it have worked?  There is no answer to that of course.  But there was no doubt in my mind that Patricia - good actress  that she was - had unnerved Flora who was baffled by Patricia's politics and by the way she brought them into her work and into her performance.   She made Flora nervous.

I was very sad that things had turned out as they did.  Flora was a great actress.  But she was totally without any political ideology (like John Gielgud) and she had accepted the role with enthusiasm; she thought it was a wonderful role.  Suddenly she found that she was expected to
engage in a political argybargy.  It baffled her.

We did not survive long in the West End.  It had brought me luck; the director of A Man for All Seasons was looking for a young actor to play Henry VIII on Broadway with Paul Scofield; I was given the role.  I liked Greta and said a fond goodbye to her; I never saw her again.  I had quite an emotional farewell to Lesley Storm and of course it was sad saying goodbye to Flora.

I hope this has been of interest to you.   Writing it down now after all these years I find it has moved me to remember all the good things  about
the experience.

With all kind wishes

In writing back and thanking him for his reply, I gave him an insight into this website, and Greta Wood's career. He further replied as follows.

Of course you may add my letter to your archive.

As I was writing to you it brought back all the frictions of rehearsals and I realise how
what seemed to be a happy ship headed straight for the rocks. What Flora didn't
understand was how much the theatre was changing.  When she was a young actress
you never had 'opinions' and you certainly didn't argue with the star.   I watched how
she was so baffled by it all.  She was a kind woman and generous woman; it was a spontaneous
gesture to bring Patricia and me forward at the curtain call in Aberdeen and present us
as "two new stars".......It was very sad because Patricia, a very fine actress, had her own integrity.
I really enjoyed my scenes with her.  And there was a fine 'theatrical' tension in the scenes
she had with Flora.

But Flora hadn't signed up to animate a political tract, she had signed up
to play a meaty role in a new play. It's fifty-eight years ago now but those memories
are bright. I am about to leave for The Shakespeare Theatre in Washington DC for
Hamlet:  not the boy, I did him forty years ago but this time it's The Ghost, the Player King,
and The Gravedigger.  Washington is a lovely city and we play to packed houses and I always
get a dinner at the British Embassy which was designed by Lutyens and gives me a kick
because as American guests arrive for the party they are faced with two huge larger-than-lifesize
portraits of George III and Queen Charlotte. 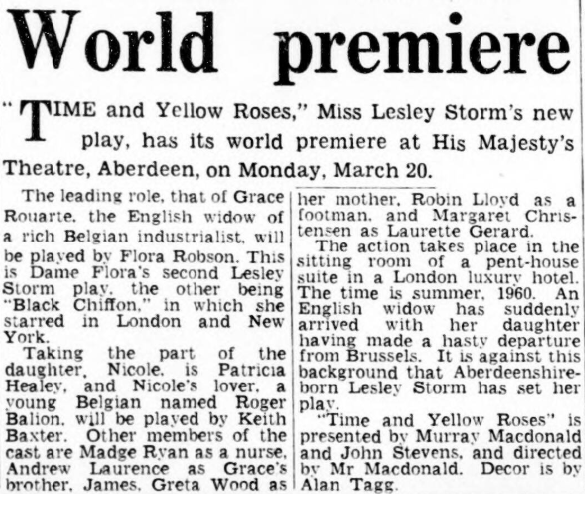 "The element of yellow roses, with remembrance of things past and of how different life might have been. It is symbolised in the person of Grace's aged, senile mother, a part that condemns Greta Wood to a chair throughout the play and but a few words to say." 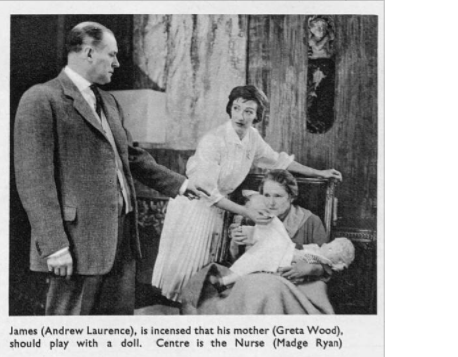 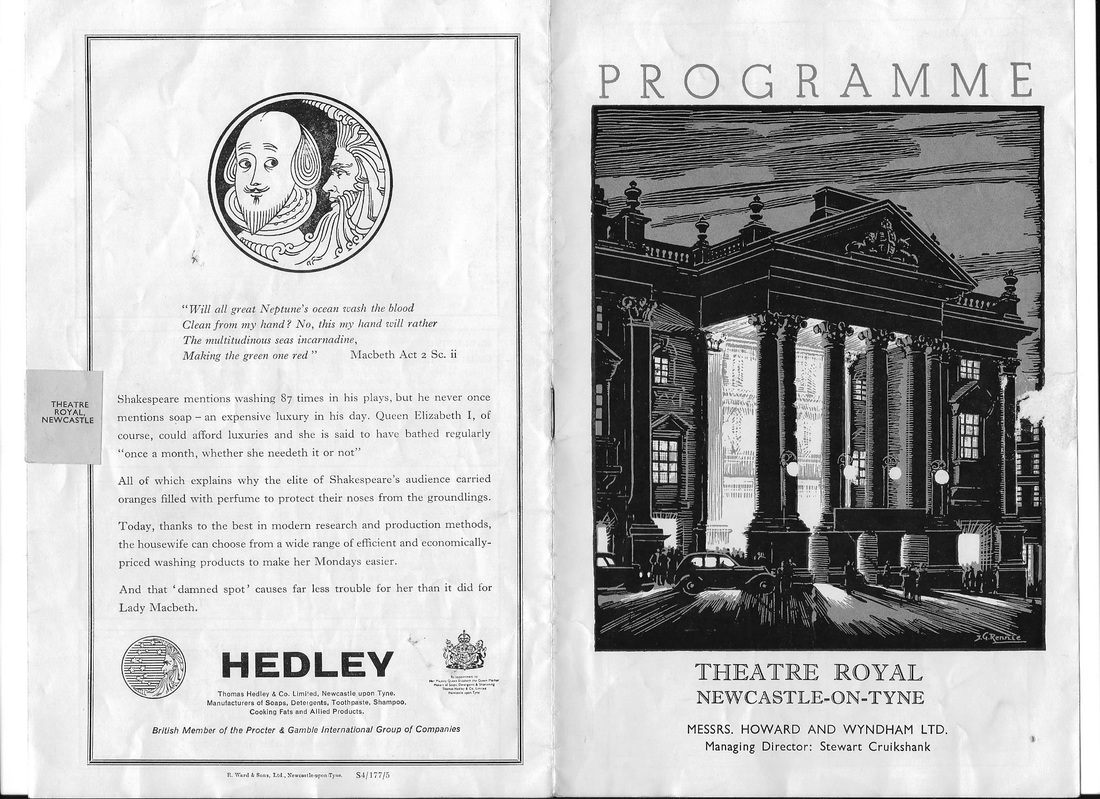 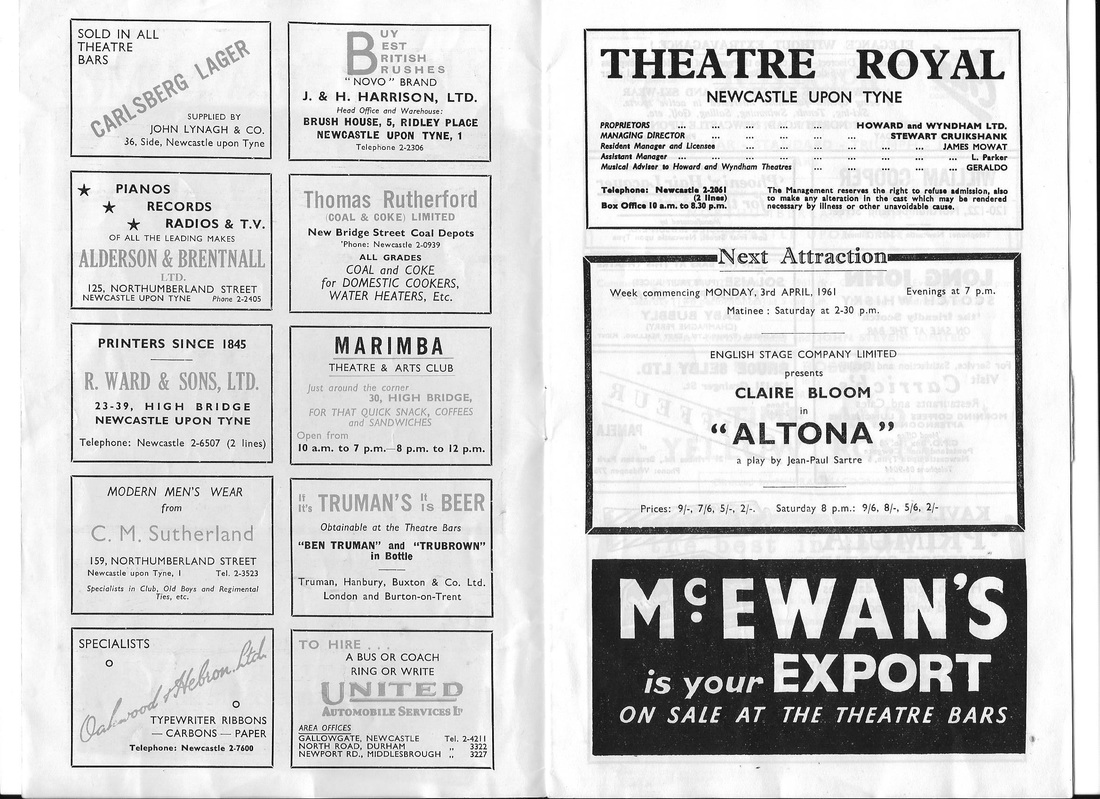 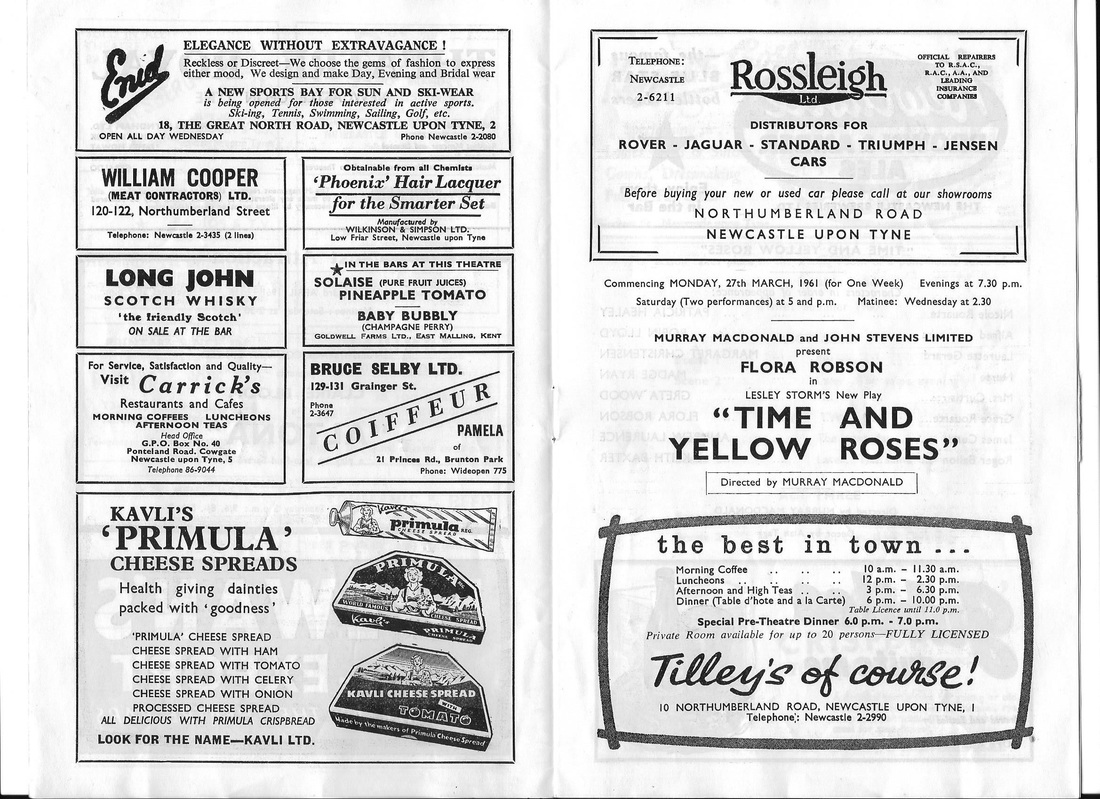 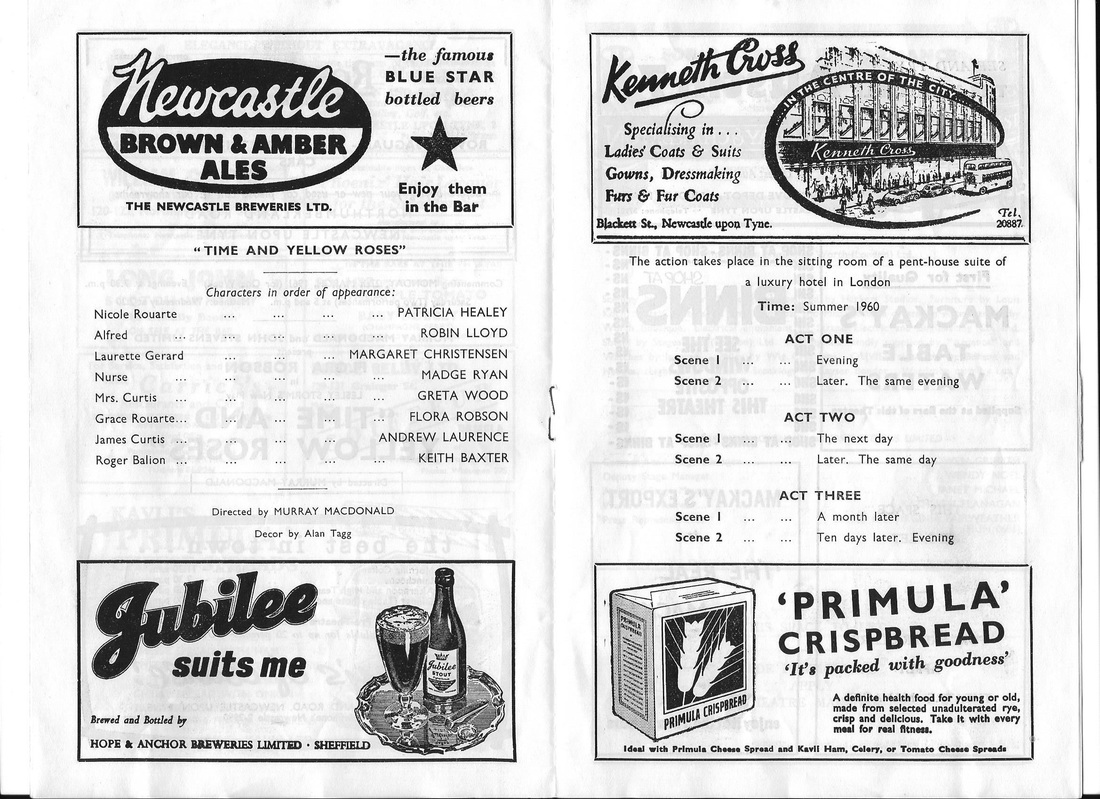 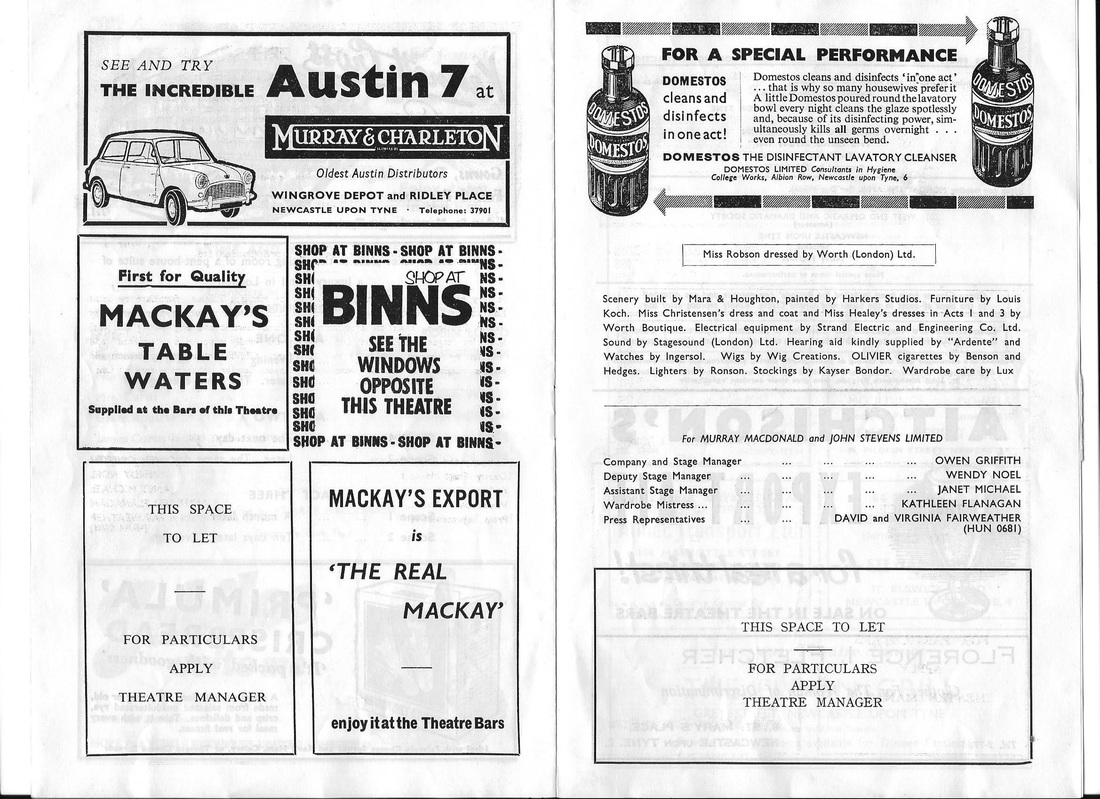 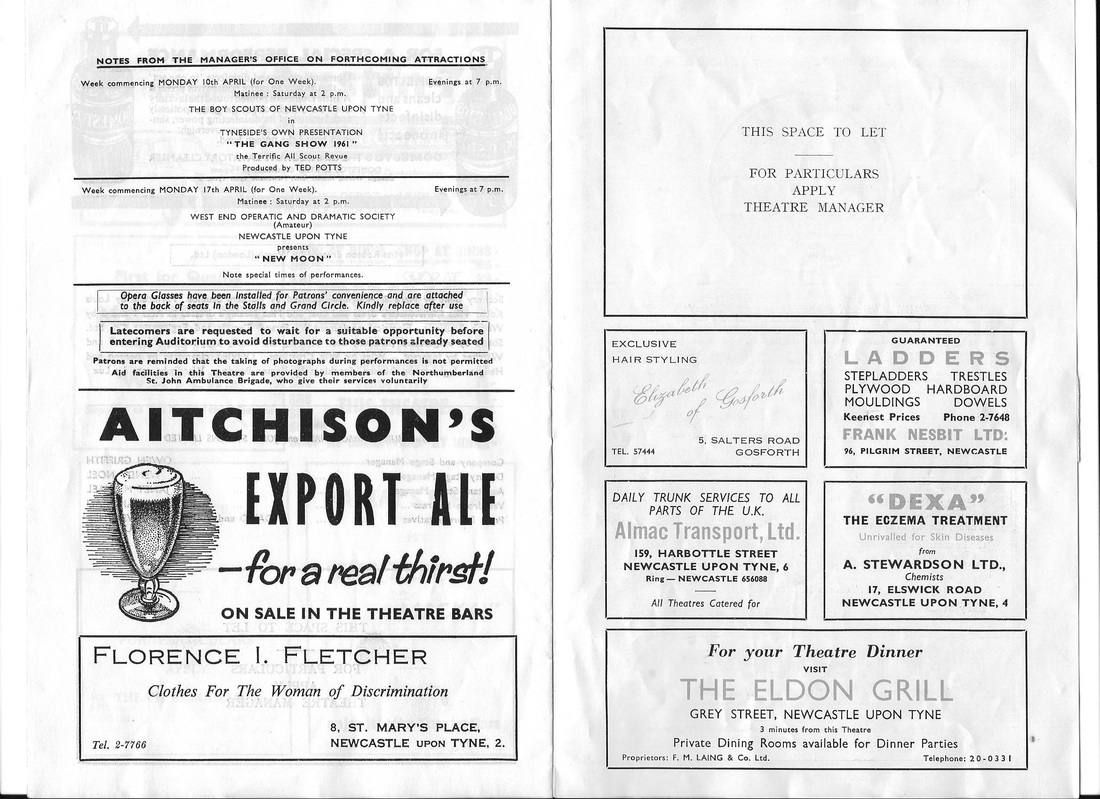 "Time and Yellow Roses" at the Theatre Royal, Newcastle upon Tyne. 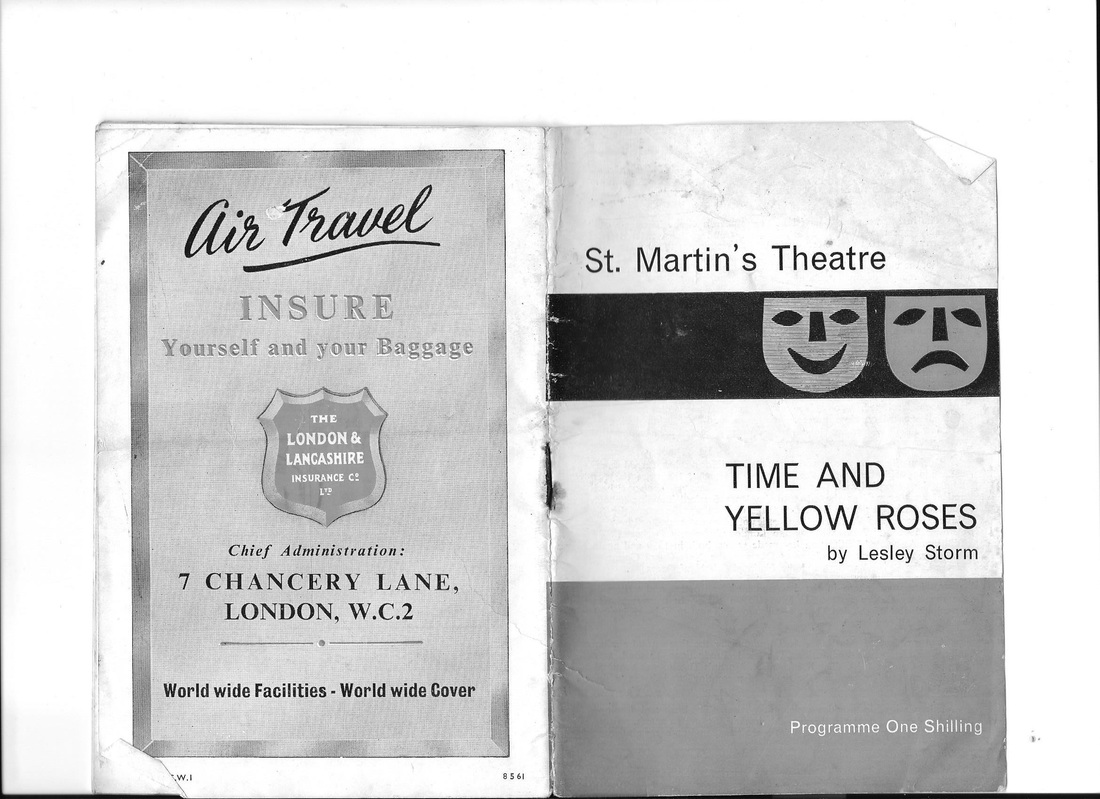 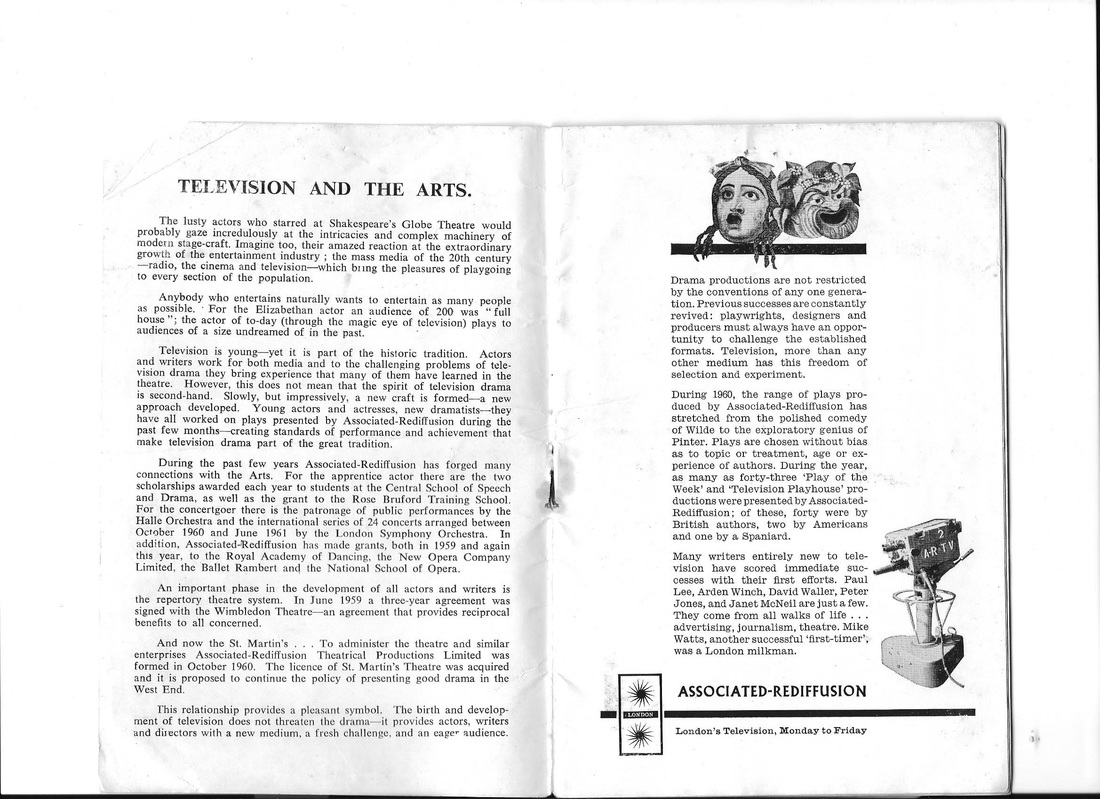 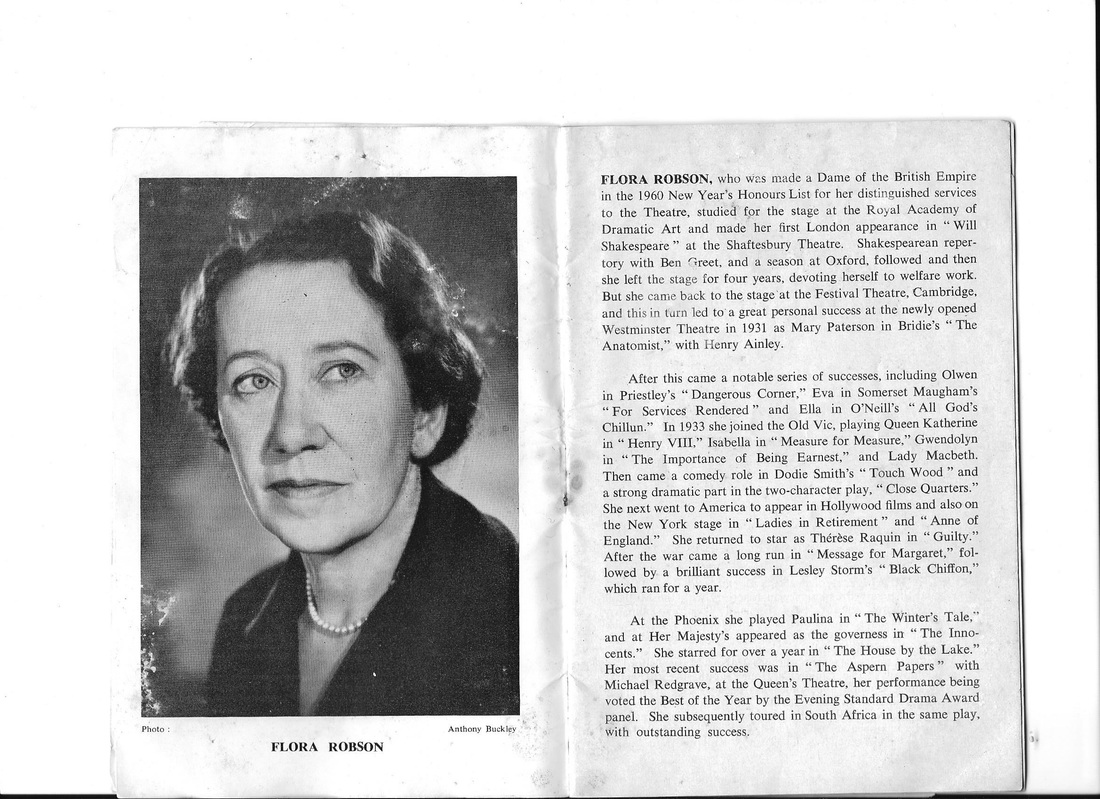 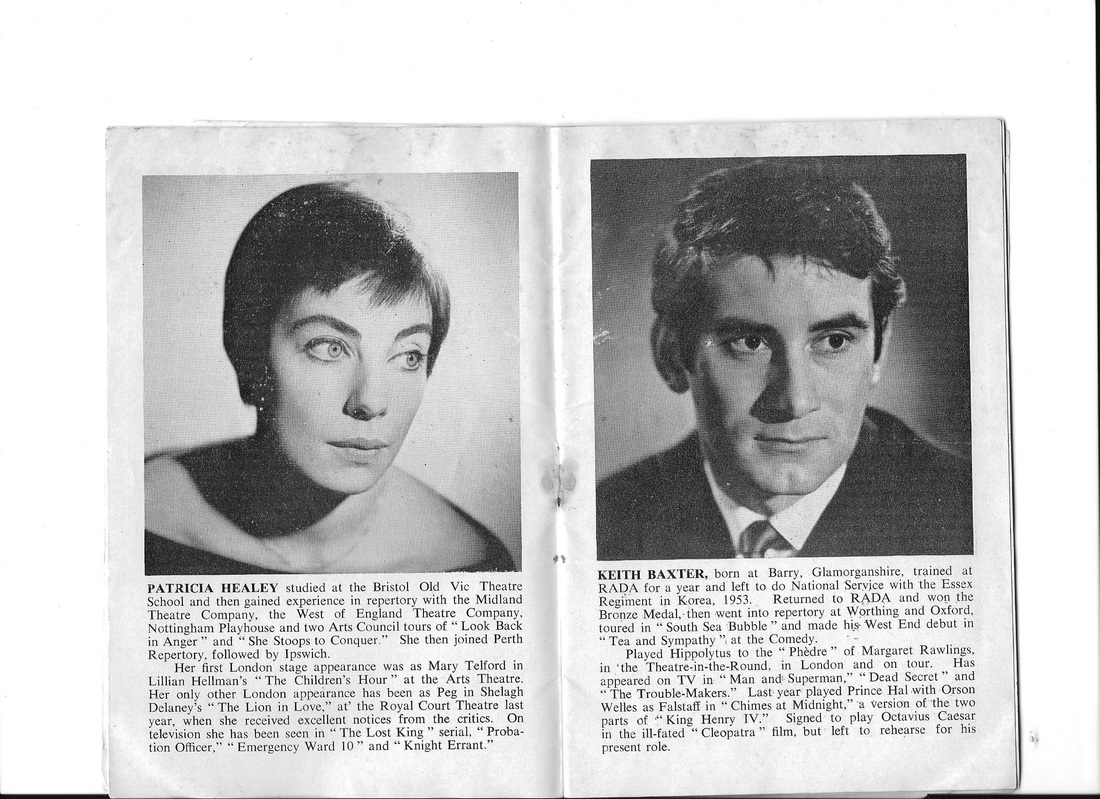 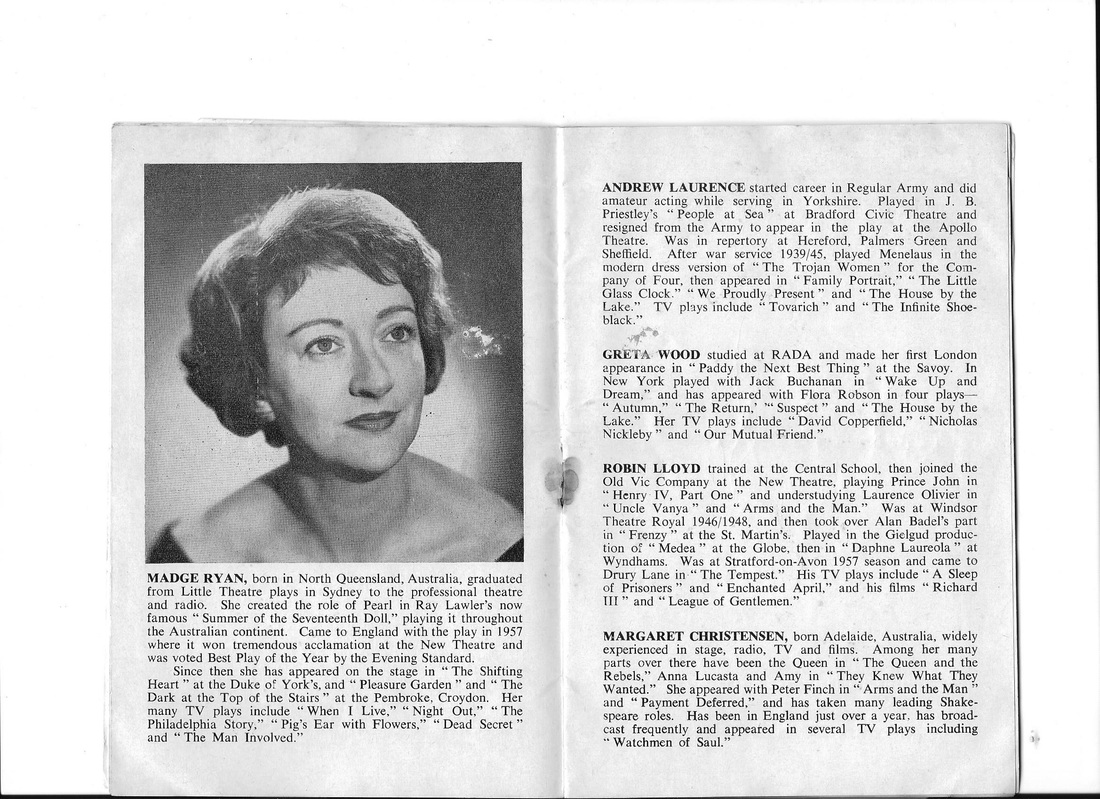 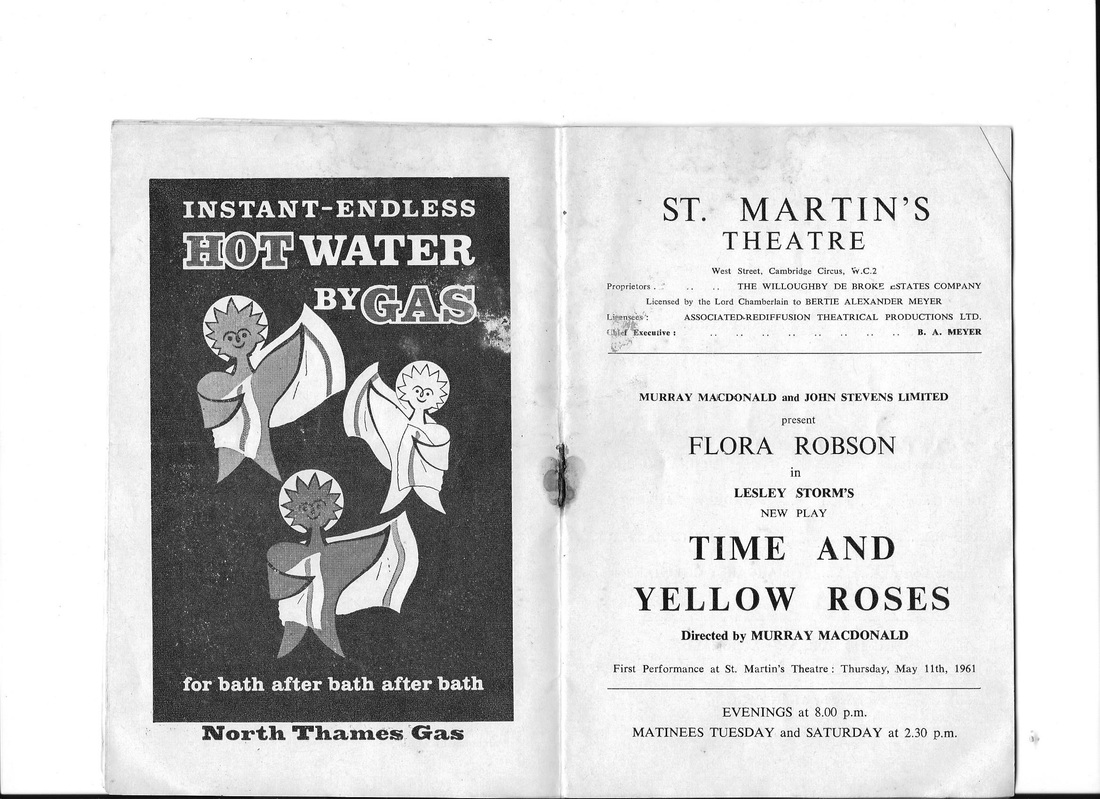 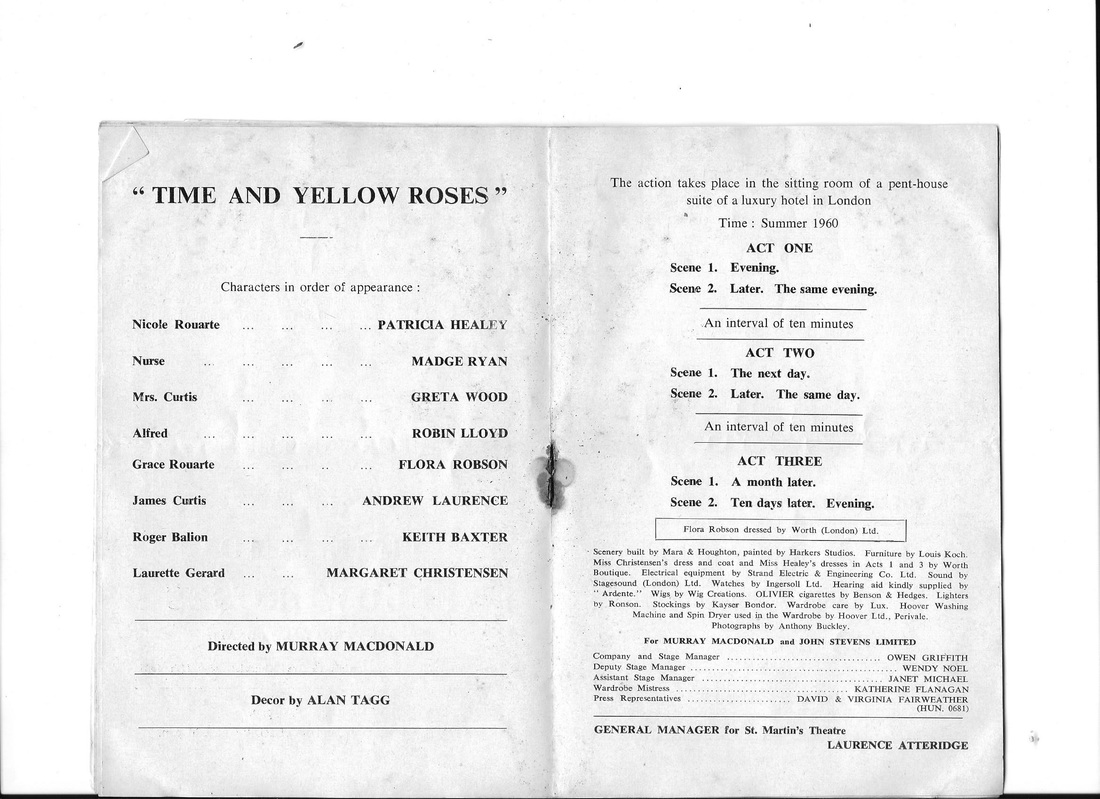 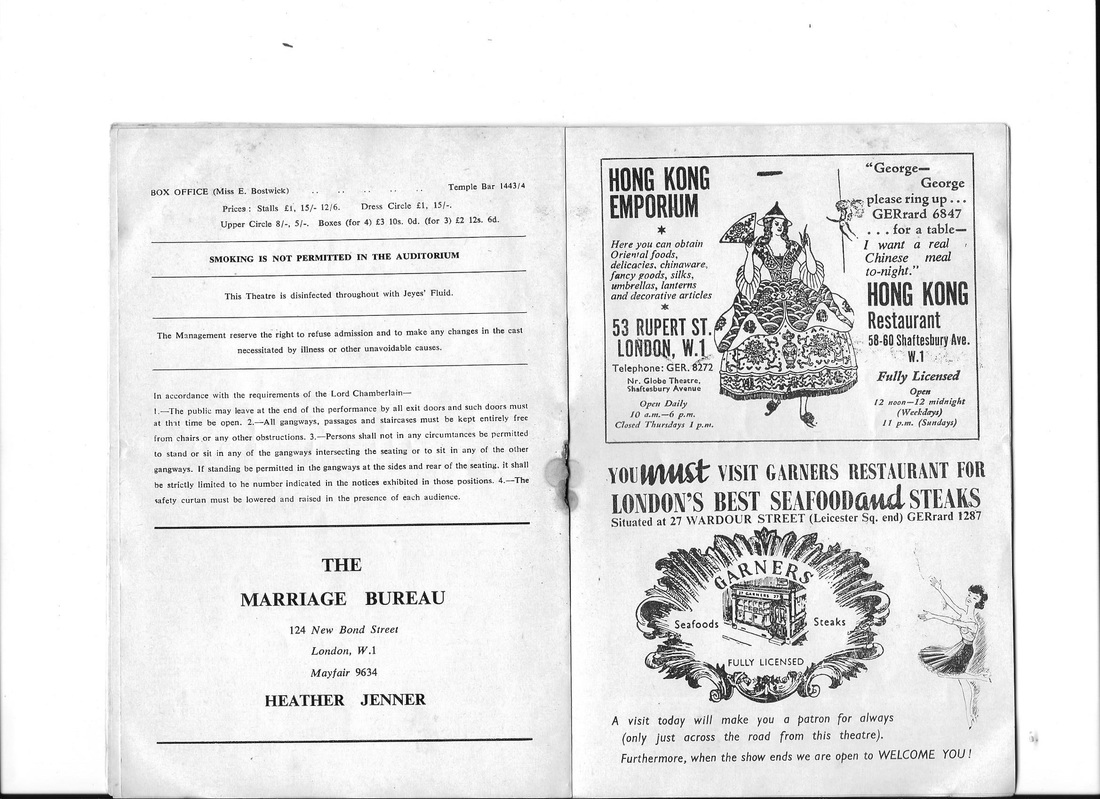 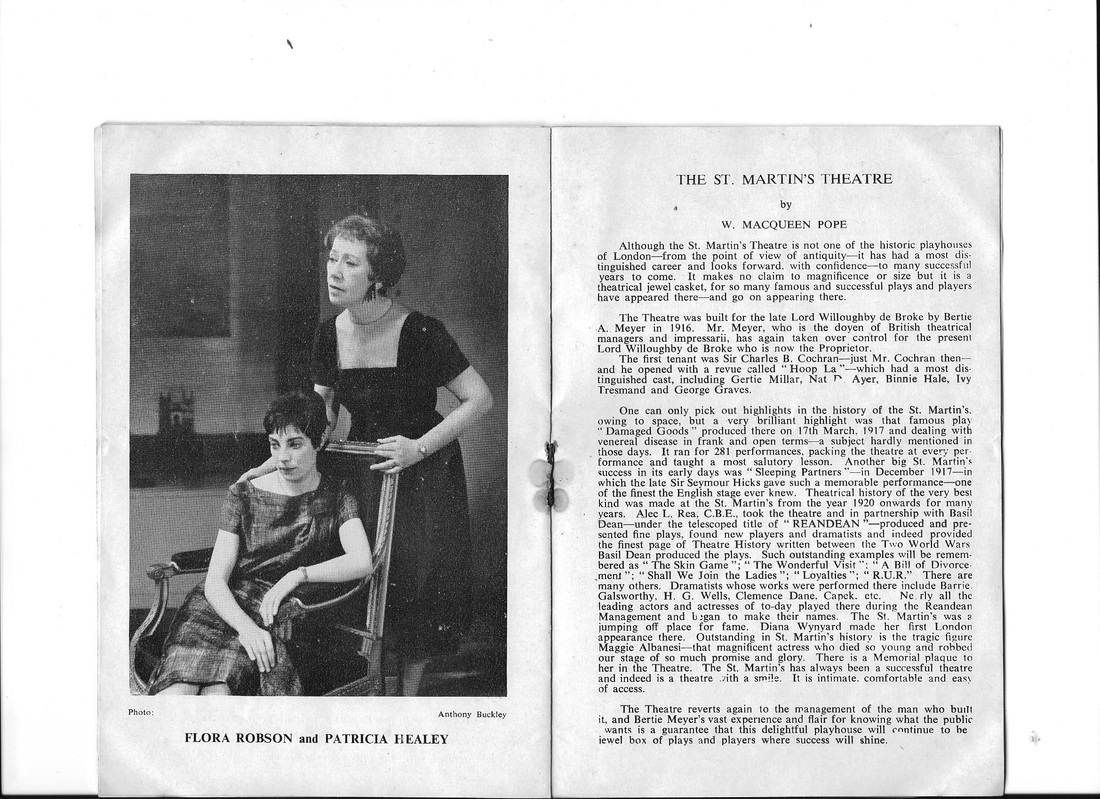 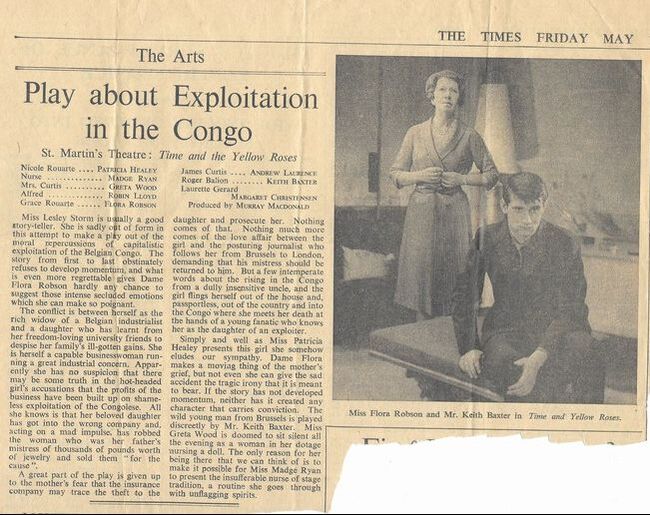