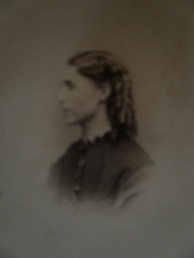 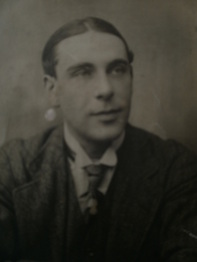 Charles Mortimer aged about 25 years
Harold Paul Monro Mortimer was born in London on the 28th of July, 1885. He was the son of Charles Neil and Rosa Mortimer.

Charles Neil (born in 1837, in Epsom, Surrey) was theatre through and through. He had been married to Emily Gibson, another well known actress, who had tragically died, when on tour in Buxton, Derbyshire, on 9th July, 1881, at the age of 42 (see newspaper clipping). She was the daughter of John Gibson, of the celebrated 19th century theatrical trio of Brown, King and Gibson.

He was well known in the theatrical world, as an actor, stage manager and producer. He had been in the profession from the 1860’s in plays such as “Alice Wingold, the Pearl of London City”, (Batty’s Royal Amphitheatre, London, May 1862), and working with the tours of Miss Isabel McKenzie (1882) and Brien McCullogh (1884). One newspaper, when describing a speech given by him in “A Winter’s Tale”, said that it was “admirably given by Mr Charles Mortimer, whose elocution was of the old school”. As a producer, he paid the princely sum in those days of £5000 for the rights to stage “The Lily and the Rose”, written by the then little known playwright, Hal Reid.

Charles Neil then married Rosa Susannah Frances Munro (born in 1849 in Ealing, West London). They were married in 1882 in West Ham, London. She was also an actress. The marriage brought Harold (to be known as Charles) into the world in 1885, followed by his brother, Edgar Francis Monro Mortimer in November, 1886. A third brother, Ormond Bruce Monro (1890 – 1963), arrived (he was to become a shoe and boot salesman eventually in Brighton).
​

According to programme notes for the play "Late Night Final" in 1931, Charles made his first appearance on stage at 6 weeks old, when he was carried on in a farce called "Mrs White".


Charles started in the theatre from an early age, performing in the Brien McDonough and Mrs Bennett Company, at the Middlesex Music Hall in 1894, where he performed sketches with his father. His first part was as Joe Winner in "East Lynne" in 1894.


Charles Neil Mortimer died on the 27th September, 1913, at the age of 76. It was believed that his death was due to the shock of losing his wife a few weeks before.

Interestingly, Charles was invited, and joined, the Freemasons in 1912, being a member of the Lodge of Asaph, which formed in 1870 and met in the afternoons to permit its membership of musicians and actors to continue with their regular jobs in orchestras and theatre in the evenings.

It is known that Charles was living at Dalcais, Heath Park Road, Romford, in 1914.

It is likely that Charles Mortimer met Gertrude Sarah Wood (known as Greta, born 26 March, 1892 in Hoylake). In 1911, her profession was "elocutionist", while they were both in the play, "The Man Who Stayed at Home", in 1916. They were to live together until 1964, when Charles passed away. They had 4 children, Basil, Rosalind, Bill, and Richard, and 6 grandchildren, including this author.

According to the book, Hammer Complete: The Films, the Personnel, the Company by Howard Maxford, Charles and Greta married in 1950, although a family friend informed me that this may have been a later date, maybe 1960.

Charles and Greta lived in London, at a number of different addresses including in no particular order:

In 1939, on the advice of their RAF son, Basil, Charles and Greta moved to Wheeler End Common, near High Wycombe im Buckinghamshire. The story told to me by my mother, was that she had a row with her parents and left the London flat. She got an evening paper, and on the final page, in the "to let" section, was an advert for a three bedroom cottage at Wheeler End Common, which they duly took. My mother went with them, and before joining TOC H ( a charity providing R and R for troops), she worked for a local doctor.
The Era 31 December, 1910, has evidence that Clara A Stephenson who married Charles Mortimer, was in fact Nora Carton, who had a theatrical troupe, of which Charles was a member, details of which can be found in the website.

"Miss Nora Carton, who for the last twelve months has toured Temptation, was married by special licence on Saturday last at the Holy Trinity Church. Warrington, to Mr. Charles H. Mortimer. The bride was given away by Mr. Martin Comstock, the general manager of the company. We wish the newly married pair every happiness."
From The Era of 31 December, 1910.

Mortimer - Stephenson - By licence, on Dec. 24, at Holy Trinity Church, Warrington. Harold Monro Mortimer (Charles H. Mortimer) to Clara Augusta Stephenson (Nora Carton).
In 1913, Nora and Charles spent three months in Norway. According to a brief article in the Era of February of that year, they had a wonderful time, which included trout fishing, but it also mentioned that "Mrs Mortimer is quite recovered", which showed that Nora had been quite ill. The article is re-produced in the "other newspaper articles" of this website.
Clara was born Clara Augusta Binns.
Birth about 1869 Heptonstall, Yorkshire.
Death 26 August 1948 (Age 79) - Sawbridgeworth, Hertfordshire.

This information has been gained from censuses of the time:

I found this information about Greta Wood from an advert for the sale of a first edition of "The Return of the Soldier" by Rebecca West.

Rebecca West – The Return of the Soldier – First UK Edition 1918 – SIGNED by the Author Nisbet
​
A first edition, first printing published by Nisbet in 1918. A very good copy, bound in publisher's green cloth with titles in black to the spine and upper board. Some sunning to the cloth and on the spine with some minor wear to the spine tips and corners. All corners are bumped with some wear to the edges. Small pale stain to the front board. Some foxing and toning, mainly to the endpapers and prelims and text block. Inscribed in pencil in the year of publication to the half-title: 'Greta Wood, 4 Russell Gardens, Golders Green from Rebecca West's first novel, featuring the homecoming of a shell-shocked captain suffering from amnesia following experiences in the Great War, and his relationships with the women in his life. Actress Greta Wood (aka Gertrude Sarah Wood, 1892-1984) was a contemporary and lifelong friend of West with a career spanning from 'Diana and Destiny' in 1916 to 'The Day after Tomorrow' in 1960. They met as students at the Academy of Dramatic Art where Greta was West's 'greatest friend'. After the war ended, West took her son to see a pantomime at Brighton and recognised Greta in the cast. The two of them became the 'a team' as West put it. She sometimes lent the struggling actress money and passed on Anthony's outgrown clothes to her son. Greta helped Rebecca in domestic crises and looked after her when she was ill. Greta married Charles Mortimer, fellow actor best known for his portrayal of Sherlock Holmes and spent her twilight years in Newcastle upon Tyne (Victoria Glendinning: 'Rebecca West: A Life' (pp. 35, 68)).

Regretably, the author could not justify the price of purchasing this book, and when contacting the vendor informing him/her of his relationship to Miss Wood, and "volunteering" to take the copy off his/her hands, he surprisingly received no reply!!