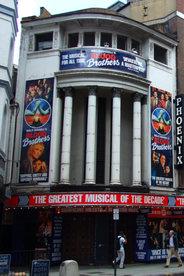 Charles Mortimer was in the cast of "Frailties", at the Phoenix Theatre, London, from 29 to 31 January, 1931, playing Mr Pauncefort.
Cast

The play was withdrawn after only 4 days following poor reviews. These included:

"Frailties has nothing in common in life. It is a rather dull piece of theatricalism." - Daily Mirror.

"Of Mr Holmes (Robert playing Mark Power) it may be said that he admirably simulated daemonic possession and that the play was faintly alive as long as he was!" - Sunday Times.

"There were only a few stray minutes when I would not rather have been elsewhere". - Daily Telegraph.

However, of Charles Mortimer, it was stated:

"Mr Charles Mortimer gave the required weight and solidity to his embodiment of an English solicitor". - The Stage.