Comment
Congratulations on the marvellous compilation of everything to do with the stage version of Cottage To Let. I saw the subsequent film at the National Film Theatre on Monday, in the company of Leslie Banks's daughter Evangeline. She is my second cousin, my mother having been Leslie's first cousin. Evangeline remembers as a young girl travelling with her father to Inverness and Aberdeen to see the play on tour.

Interesting that your grandmother Greta was born in Hoylake. That was also Leslie Banks's family home, his parents having moving there from Liverpool during his early childhood. I wonder if he and Greta knew each other there.

On replying, I further received this on the 13 April:

William, Evangeline was only a child when she saw CottageTo Let and remembers next to nothing about the cast. But happily you have done such wonderful research that you already know a very great deal about your distinguished grandparents.

Once again thanks for all the memorabilia you have placed online. I've alerted several friends to the link and all have been astonished by the thoroughness.

James
"Cottage to Let" played at the Wyndham's Theatre, London, from 31 July to 7 September, 1940, and then 3 May to 19 August, 1941. It moved to the Opera House, Manchester, and was reviewed on the 26 August, 1941 (see below). When London theatres closed due to the blitz, the production toured army camps to entertain the troops.
THE THEATRE "Cottage to Let" by Geoffrey Kerr at Wyndham's. (Taken from the Spectator of 15 May 1941)

I REMEMBER being taken as a child during the last war to see Seven Days' Leave at the Lyceum. It was a magnificent play which has had too few successors in this sophisticated war : it ended in the destruction of a German submarine, a satisfactory conclusion in 1917 when our tonnage-losses were even greater than they are now. I have a rather dubious memory of the heroine swimming out to the submarine and then appearing on the stage in a wet macintosh—this seems improbable, not that probability Is an essential feature of a war - thriller. Cottage to Let, our nearest modern equivalent, also ends satisfactorily with a U-boat sunk and a spy brought to justice: it is about a scientist (Mr. Leslie Banks) who has invented a drug which destroys the sense of pain: he alone knows the formula, so a Ger- man agent (rather surprisingly Mr. Alistair Sun) arranges to have him kidnapped, put on board a U-boat and taken to Germany, while evidence to show that he has murdered his assistant and sold himself to the enemy is carefully planted. The sedate drawing-room-set inevitably gives place to the lonely bungalow on the cliffs, where the effects include revolver-shots, flares, bombs and aeroplane-engines. The London audience reacted more nervously to the flares and bombs than when this play was first produced in the days before the blitz.

When this play is funny it is very good indeed (and it isn't often—except in the lonely bungalow—serious). How could it fail to be, lightened with the foolish charm of Miss Gillian Lind as the vague scientist's even vaguer wife—the pencilled oriental eyebrows, the scimitar of young white hair, huge dark glasses and voice lacquer-deep; and with Mr. Sim as the agent disguised in brown plus-fours as "a man who goes out and shoots things "? The long agile simian leaps, the tortuous rubber-mouth, the rich giggle and the expressive hand-clasps, the too-ready intimacies (" You can trust old Charlie Dimble ") are familiar enough in the service of comedy. Waiting with a knife in his gloved hands to stab his nervous colleague or sadly watching his elaborate pack of cards tumble, he gives us a hint of what he could do with the sinister, even the tragic.

But in spite of these admirable players—and ot Mr. Fred Groves as a policeman disguised as a butler (" had a couple of weeks at a school for butlers in the Cromwell Road "), and Mr. Charles Mortimer as a pig-headed chief constable—the honours must still go to Master George Cole as the evacuee-schoolboy who is following in the steps of Sherlock Holmes—a bit unscrupulously (" I'd get nothing if I waited for people to give me things "). This is as fine a bit of natural acting as you will see in London in a part that has all the swagger of a story in Chums.

The Manchester Guardian - 26 August, 1941 (With kind permission of the Guardian News and Media Ltd).

Geoffrey Kerr's "Cottage to Let" returns this week to the Opera House, where it opened a year ago. Its continued success is well deserved and not hard to understand, for it offers "escapist" entertainment of high quality in an artful and quite unexceptionable form. It is, in fact, a play ostensibly about this war whose plot is entirely in the tradition of the spy melodrama of bygone days; than which nothing could be less distressing to those who go to the theatre for release from a world that is too much with us.

But if the plot is distinctly unreal the treatment and production are as up-to-date and streamlined as a Tornado or a Tomahawk. In place of the rich tones of melodrama we have the brittle scintillations of the lightest of light comedy, dialogue that is often brilliant of its kind, and a production that is a persuasive model of the modern drawing-room school.The only lapse is the scene in the cliff-top bungalow, where the plot thickens too much to be amenable to the naturalistic touch; and a brilliant closing scene makes up for that.

As the boyish, wool-gathering scientist hero Leslie Banks has a part in his sleep. Gillian Lind makes a delightful study of his still more scatter-brained wife. But the honours for sheer acting go to George Cole as the evacuee boy who unmasks the villain. That Alistair Sim can play that villain is an index of the play's frivalous spirit, yet one cannot believe it of him, though he does it very well. Among the minor characters Charles Mortimer stands out in the beautifully written part of a county Chief Constable.
Exeter and Plymouth Gazette - 4 April, 1941. Theatre Royal, Exeter.

"A boy actor, George Cole, who won the praise of the critics for his performance of the evacuee whose detective ambitions lead him to tripping up the spy, should delight Exeter playgoers. Other leaders are Gillian Lind, Fred Groves, Charles Mortimer, and, of particular local interest, Thorley Walters......."

"Full acting honours are shared by Alastair Sim and Leslie Banks, who play their respective roles with skill. Gillian Lind is delightful as Helen Barington, and George Cole gives an outstanding performance as the young evacuee. Other parts are capably handled by Fred Groves, Pamela Neil, Charles Mortimer, and Richard Williams."

DUDLEY HIPPODROME Cottage to Let.” Geoffrey Kerr’s comedy thriller, at Dudley Hippodrome, unfolds a spy story of the present war. The cast and production are the originals from Wyndham’s Theatre, London, with Leslie Banks in the part of John Barjngton, an eccentric scientist who discovers a formula for killing all sense of pain. The unconventional spy in the play is Alastair Sim. The part of Barington’s wife is taken by Gillian Lynd, and other characters are by George Jean Short, Fred Evans and Charles Mortimer. 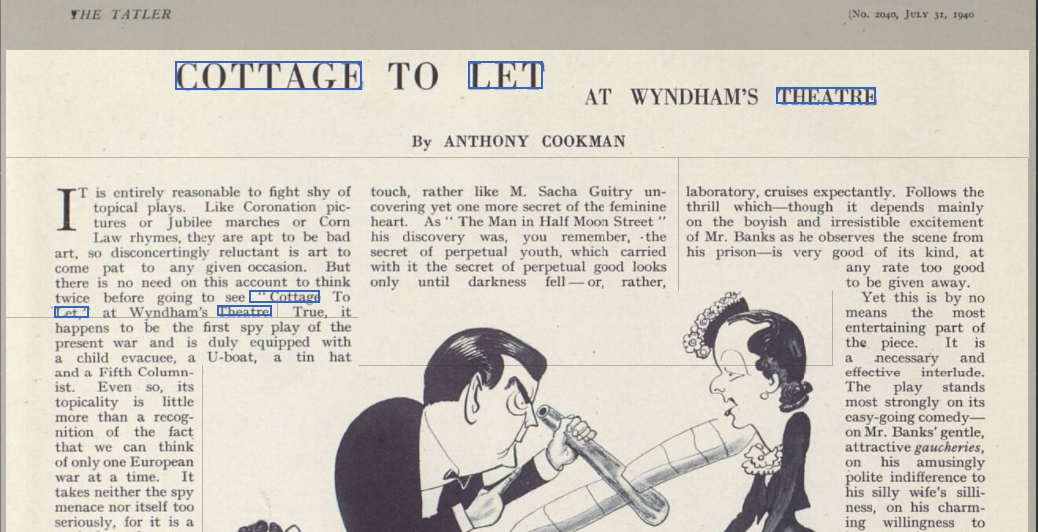 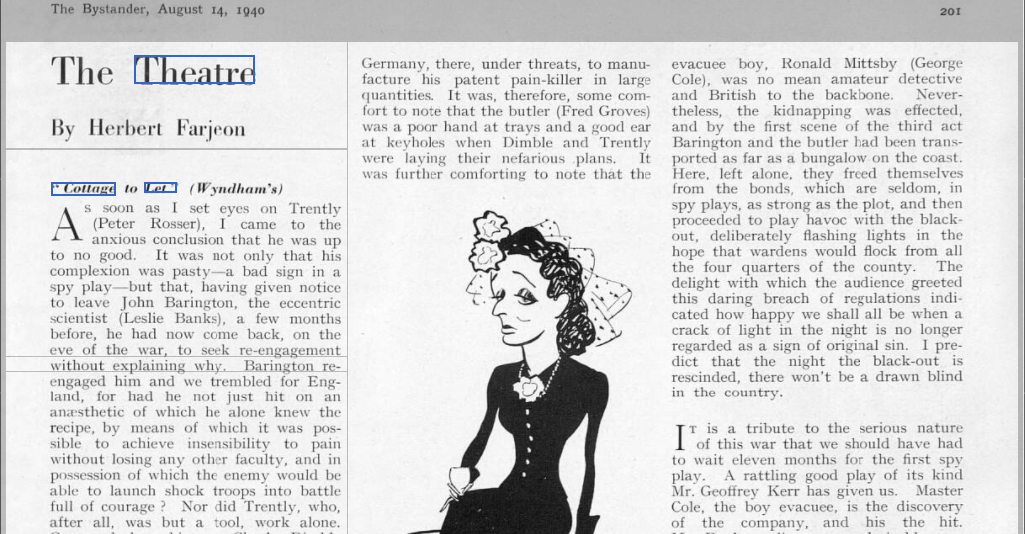 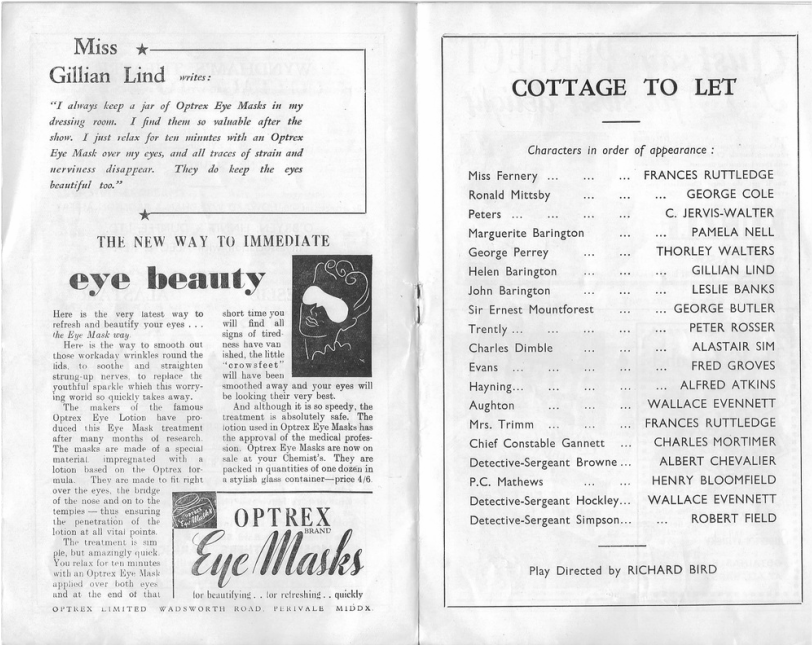 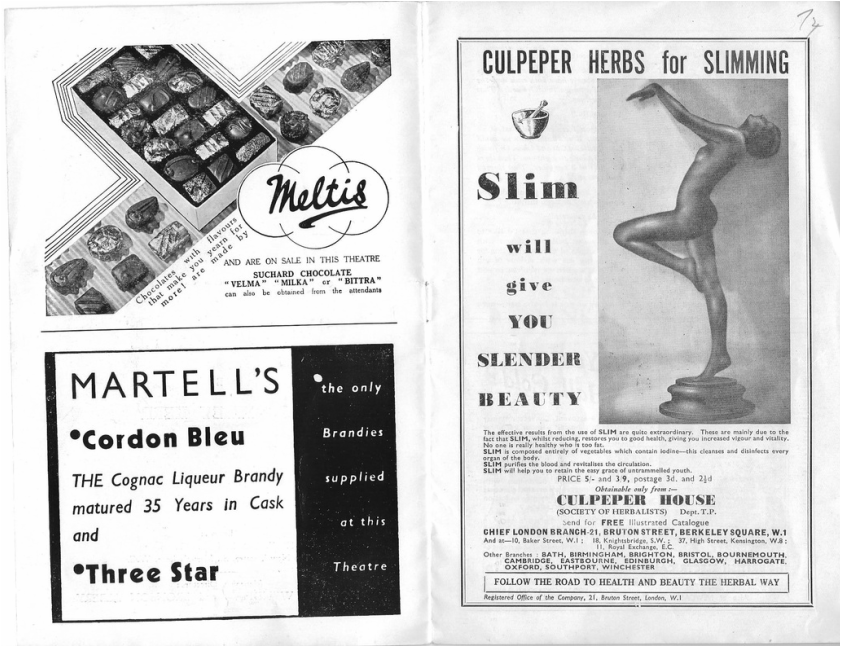 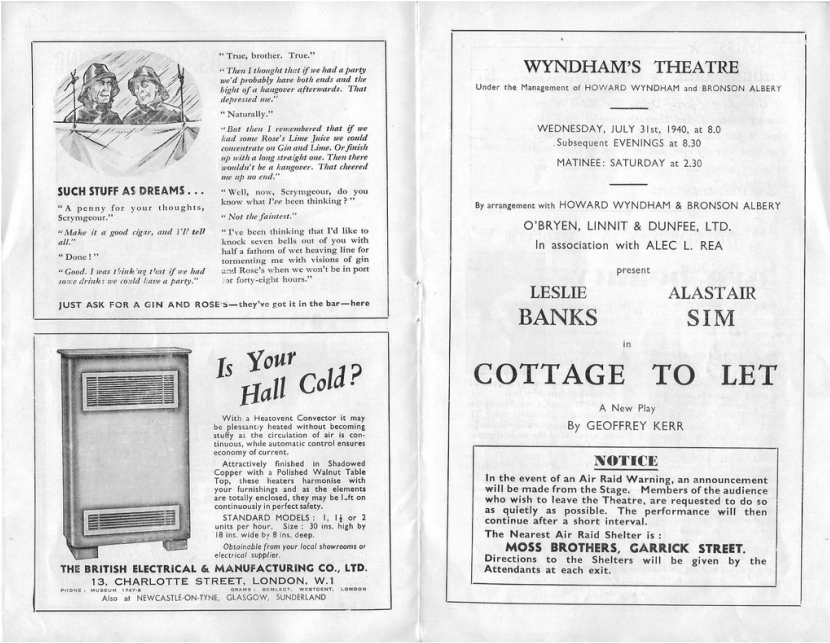 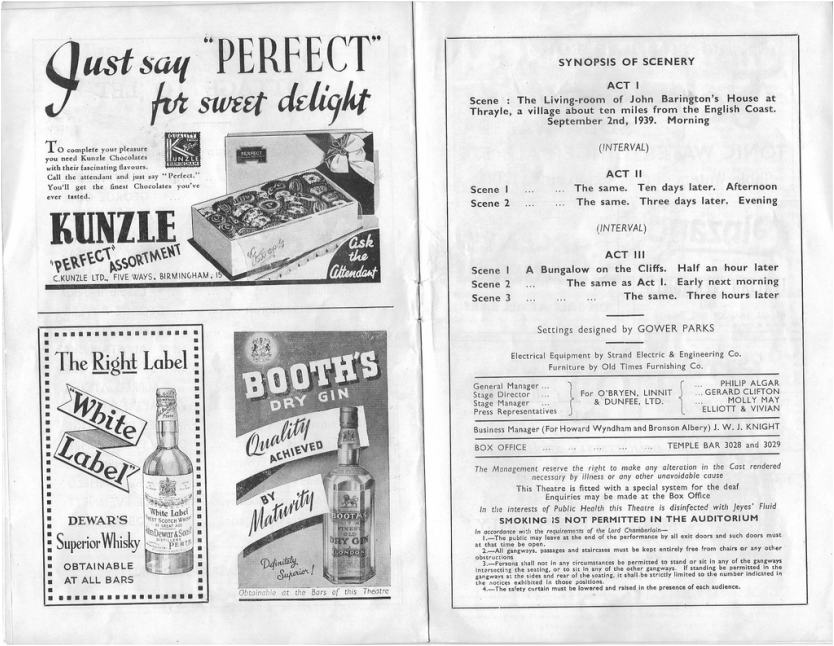 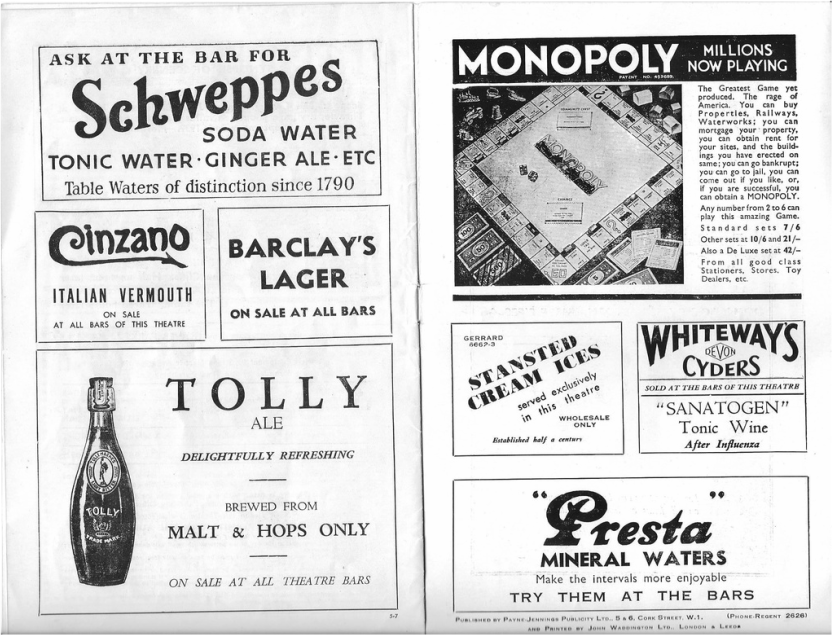 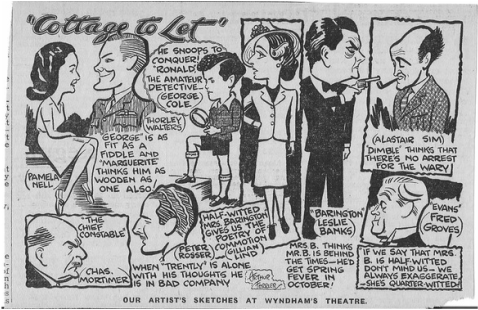 Cartoon caricatures of well known playes were reproduced in newspapers of the day. 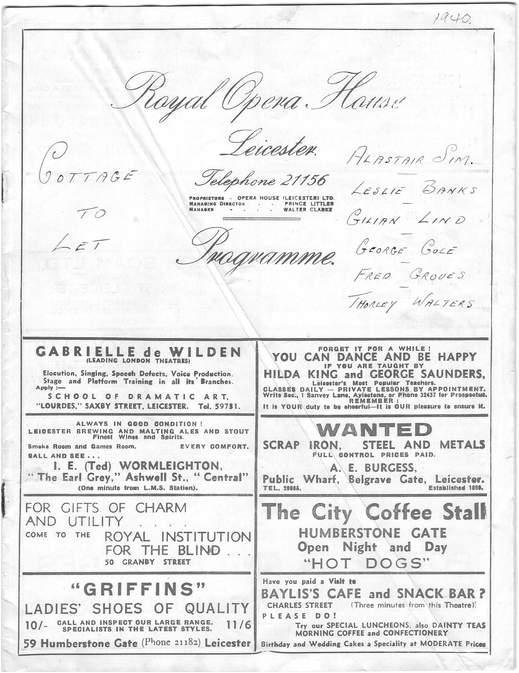 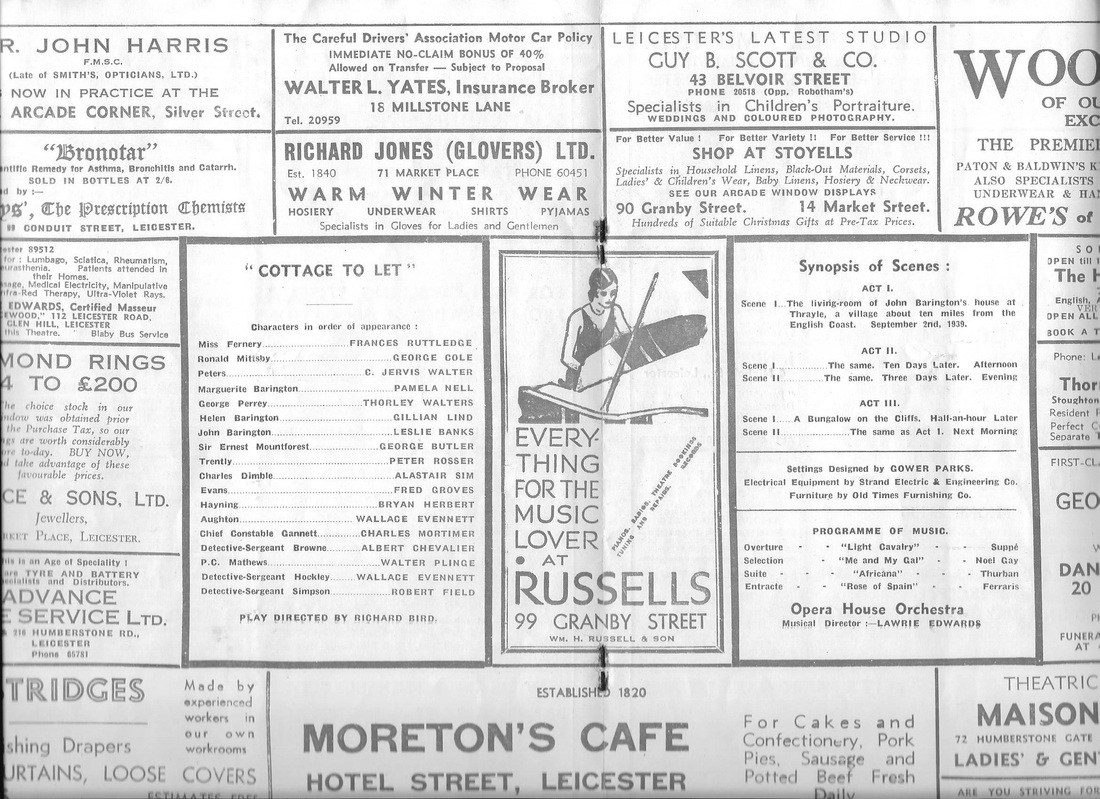 24 February, 2019. ​I have just watched and recorded the film version of Cottage to Let, made in 1941. Among the cast are Leslie Banks, Alistair Sim and George Cole, who were also in the stage play, performed in 1940 (see details in the Theatre section). Charles Mortimer played a police detective with success on the stage, but was not involved in the film. Interestingly, however, also in the film cast was Michael Wilding. I remember my mother telling me that Charles' wife, Greta Wood (my grandmother) wrote to Mr Wilding in the 1970's, congratulating him on his knighthood. Mr Wilding, who I believe lived in Buckinghamshire/Oxfordshire area, close to the cottage, replied with a nice note thanking Greta for her kindness, but informing her that she was a little premature, he had not received a knighthood.