"Humour is proportionately blended throughout and the neat cameos of Manning Whiley, Nan Hopkins, and Charles Mortimer are acceptable, as is the lively work of Jean Short and R. Meadows White."


THE THEATRE Goodnight Children." At the New Theatre. (taken from The Spectator of 12 February 1942)

ThE curtain rises on a stage setting for which the designer, Mr. Michael Relph, deserves a special round of applause. It represents a small broadcasting studio, and its hygienic spinsterdom —the desks, the chairs, the discreetly modernistic " wall-decoration, all setting off to perfection the brutal reality of the micro- phones and the effects paraphernalia—aptly sums up for us, in one quick glance, the mise-en-scene. But wait a minute ; an elaborate programme note disclaims any suggestion that the B.B.C. is here represented. This, we are told, is a mythical organisation known as the English Broadcasting Company, and this is one of its regional studios " in the remote county of Barset."

In the first act Mr. Priestley parades before us a magnificent collection of-radio types—the frustrated and cynical producers, the announcer with a passion for the children's hour, the corteges of secretaries performing their mysterious rites, the actors and actresses trying vainly to equate their present shadowy existence with the past realities of perpetual touring companies, the cockney effects boy who cuts through the whole scented fake with a veritable nor'-easter of practical reality, and last, but not least, the pompous and utterly impervious executives.

Indeed, as long as Mr. Priestley is interweaving all these characters in their various efforts to arrive at the evening's transmissions, the play is vastly entertaining, particularly since the ridicule is tempered by kindliness. But even in the first act there are perturbing indications that Mr. Priestley—for senti- mental if no other reasons—is determined to pair off most of his cast before the final curtain ; and as the play (which is in any case far too long) proceeds to its second and its third acts, the intrusion of a series of love affairs is continually bringing it down to the level of common or gardenia comedy, according to the social status of the various characters. It would perhaps have been wiser to have concentrated- purely on the radio aspects, and made it a nice tight little curtain-raiser.

As it is, the story of Tristan Sprott's effort to produce a Barsetshire programme, with genuine local colour in the shape of an aged yokel who can play the serpent, is held' up again and again by the by no means interesting personal affaires of the various characters. True that the more intellectual of them manage, during their love-making, to deliver pretty long harangues about the frustrations and miseries of the creative artist, caught in the toils of the " English Broadcasting Com- pany " ; true, also that in the said harangues he strikes some shrewd and deserved blows against bureaucracy and the old school tie ; yet all this belongs to a different play, one which should be completely serious or savagely satirical. Mr. Priestley, in fact, has tried to inflate a not unattractive football to the size of a barrage balloon, and has failed for want of breath.

"Nevertheless, the three outstanding performances are by Charles Mortimer, as the local bureaucrat, magnificently unassailably retired R.N; by R Meadows White, as the recalcitrant serpent player who makes Churdles Ash look like a "straight" part; and by George Cole, who gives a virtuoso performance as an effects boy required with the minimum of equipment to produce the continuous noise of conviviality in a Barsetshire pub." 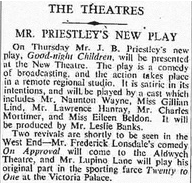 With kind permission of the Times.