THE trouble about Dr. Clitterhouse is that he never existed, that we know he 'never existed, and that his adventures have accordingly only an academic ingenuity. How easily it might have been otherwise ! Mr. Lyndon's plot is roughly as follows : A young doctor, believing that crime has a physical as well as a psychological effect on its perpetrators, turns burglar in his spare time.' In the interests of science he records his own and his accomplices' reactions throughout a number of highly successful burglaries. When he has col- lected enough material he proposes to drop out of the game ; but a villainous " fence "—the only one of his associates who has discovered his identity—threatens blackmail, thus giving the doctor the chance to test his own reactions as' a practising murderer. He takes this chance, but fails for once to baffle the police. On the eve of arrest he tells all to an improbable K.C., and asks what are his chances of acquittal. The K.C. says they are excellent. Why ? Because Dr. Clitterhouse is obviously mad. The curtain falls on what is clearly intended as a happy ending ; but to at least one member of the audience much the most amazing thing about Dr. Clitterhouse was the almost hilarious equanimity with which he accepted the fate of a homicidal lunatic with a distinguished criminal record.

It may seem grudging to pick a quarrel with what is, as it stands, agreeable and mildly exciting entertainment. But how vastly the play would be improved if Dr. Clitterhouse were something more than a puppet, actuated by slender and recondite motives and immune to all human feelings save a vague and engagingly humorous anxiety. We are never con- vinced of his devotion to science, nor of his burglarious skill, nor of anything that is supposed to be his. Yet we so easily might have been. Suppose that what had started as a cool experiment had become an abiding passion. Suppose 'even that Dr. Clitterhouse's manner and aspect had in some degree reflected those symptoms which he was risking his liberty to diagnose. Suppose—but it is too much to bid Mr. Lyndon rewrite his play ; and it is doubtful whether there is any economic necessity for him to do so.

All the same, one would have liked Mr. Ralph Richardson to have had the chance of making the sawbones turned cut- purse something more than a disarming automaton. Some of the others have richer though smaller opportunities ; Mr. S. Victor Stanley brilliantly exploits the humours of a Cockney felon, while Mr. Charles Mortimer is excellently dour and dastardly as the fence. Mr. Charles Farrell and Mr. Hugh E. Wright also shine in the underworld. 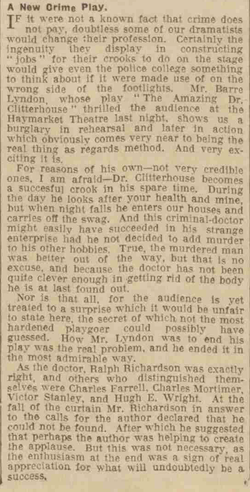 Taken from the Western Morning News and Daily Gazette on 8 August, 1936.
The Week's Theatres - The Guardian (with kind permission of the Guardian News & Media Ltd.)


The adjective in the title is just. For Mr. Lyndon is not making a timid declaration and offering to score a single trick in Queer Cards; he is out for the game. The audience must indeed be in gamesome spirit to accept his plot. There never was a taller story. But it is the sustained opinion of the British playgoer that a good crook justifies any yarn, and the fact remains that many plays of this type, which are impossible to think about, are easy and agreeable to watch. Dr Clitterhouse, with Mr. Ralph Richardson in his strangely vagrant shoes, is in this class of good company and he will remain with us, I imagine, until Christmas. His tale will not endure logical scrutiny, but it will stand up to box office test. For the story, which is absurd. is not propelled at us with too much seriousness, despite the blunder of beginning with darkness and solemn music as though we were doomed to an evening of high tradegy with Thames and Chieftains and battles-long-ago. The thing is an adventure in the country of Edgar not of William Wallace, and may be taken with all appropriate pinches of salt.


Dr Clitterhouse has a curious mind. He wants to know about the blood-pressure, respiration and so forth of criminals before and after the crime. So he becomes a criminal just to see, and finds the cracking of cribs as easy as the feeling of a pulse. It seems a trifle hard on the folk whose valuables he purloins that they (and/or the insurance companies) have to suffer so much that he should learn so little. You would have thought, having taken the jewels and his own blood-pressure in rapid succession, he would have retruned the former to their proper owners, science being satisfied. Nothing of the sort. Acting as the Robin Hood of St. John's Wood, he sells the sparklers and sends the proceeds to the Prisoners Aid or a constabular charity, thus robbing Peter to pay police orphans. At the same time he gets in with a gang, whose nefarious activities in Napoleonically commands in the looting of the city. They are a nice gang, at least, to observe at a safe distance, and their escapades in basement and on the tiles make first rate theatre.


Well-assorted,and well-presented by Messrs. Charles Mortimer, Charles Farrell, Victor Stanley, Hugh E Wright, and Miss Meriel Forbes, they are both directed and diagnosed by the amazing doctor, who has no sooner led them out of a tight corner than he is taking blood tests and peering down the ir throats in order to discover the reactions on the larynx of a rsiky night upon the roof. The formidable "fence", played by Mr. Mortimer, the artful dodgers of Messrs. Farrell and Stanley, and the very old "lag" played with exquisite frailty by Mr. Wright, make a fine team for Mr. Richardson to lead, and their scenes go splendidly. In the last act where the "fence" turns nasty, and Clitterhouse, swollen with success, resolves to get away with murder, is not only the tall end of a tall story, but a bit too steep for any acceptance. The tough comes to blackmail the doctor in his consulting room; he knows the doctor is up to all criminal practices, and he surely knows also that the doctor will have drugs on his premises. Almost at once the blackmailer asks his medical victim for a drink, and then does not even watch him mix it. well - I mean-ter-say, as Mr. Robey would remark.


Miss Joan Marion does her bit well in nurse's uniform, and Mr. Eric Stanley as a detective, helps to get the play started on right lines of gay escapade by his share in the excellent comedy of the first scene. It is not enough for Dr. Clitterhouse to be amazing; he must - so unlikely is his story - be amusing too. Mr. Ralph Richardson brings a personality essentially sane and solid to a tale that is freakish and fantastic. But he cleverly gives to this sanity a kind of whimsical twist; by a lift of the brow and a light in the eye he so tempers the measured gravity of his performance as to persuade us that the doctor might just possibly do these preposterous things. He is an actor of real star-quality, which means that you do not get tired of him however long he goes on. he does not just contribute finely to a play; he holds it together. In this case the play certainly needs a firm grasp and , fortunately, gets it. 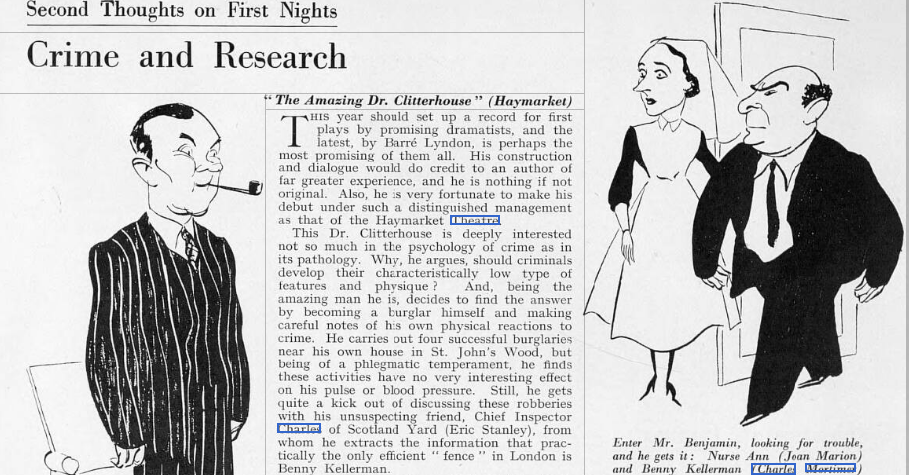 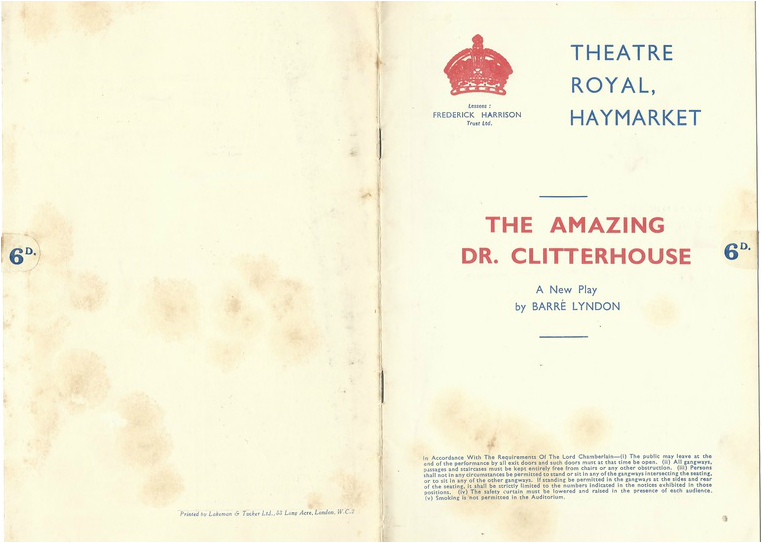 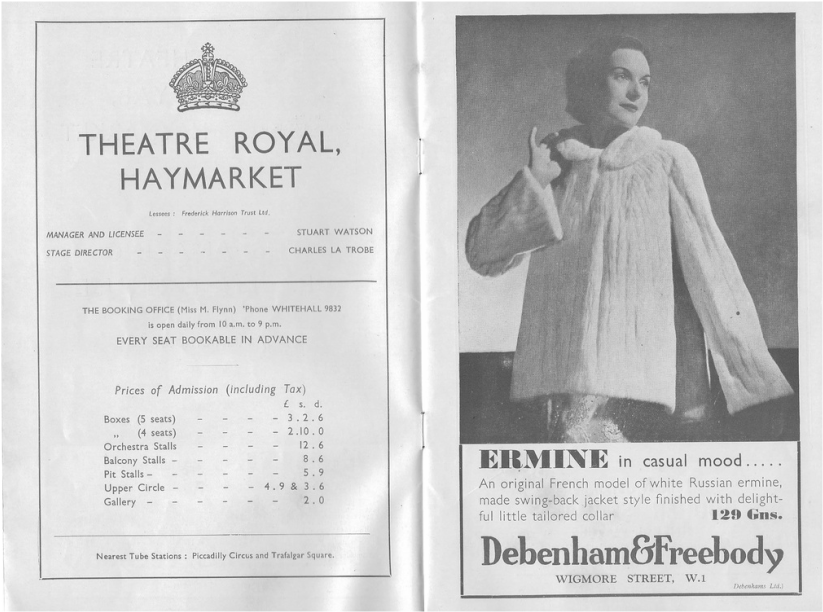 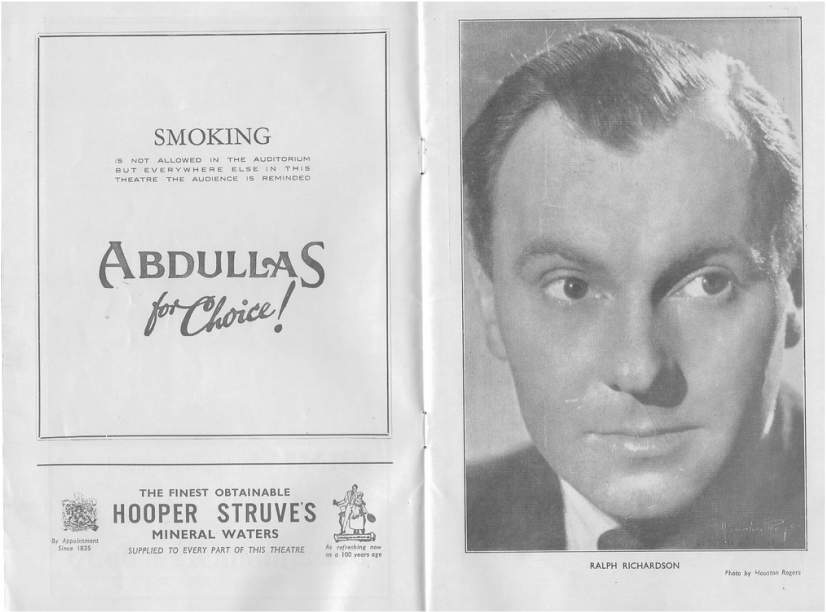 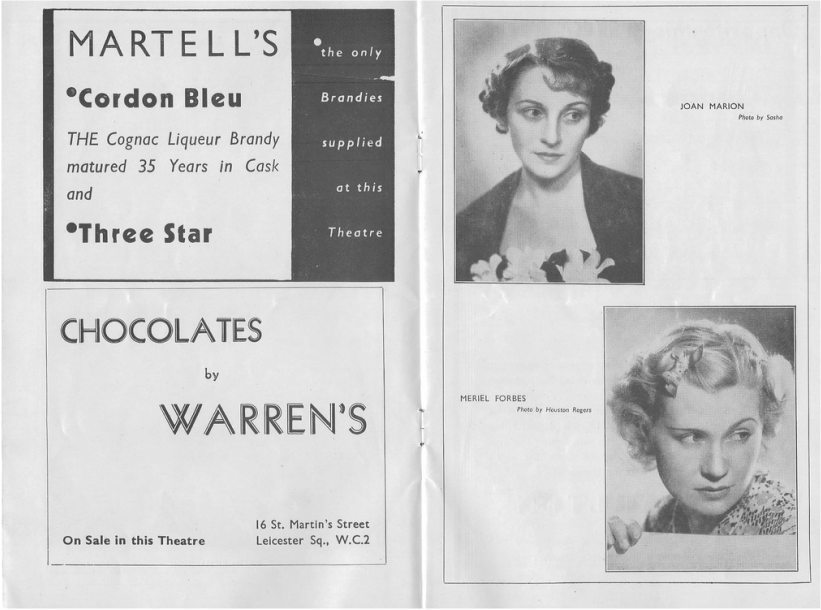 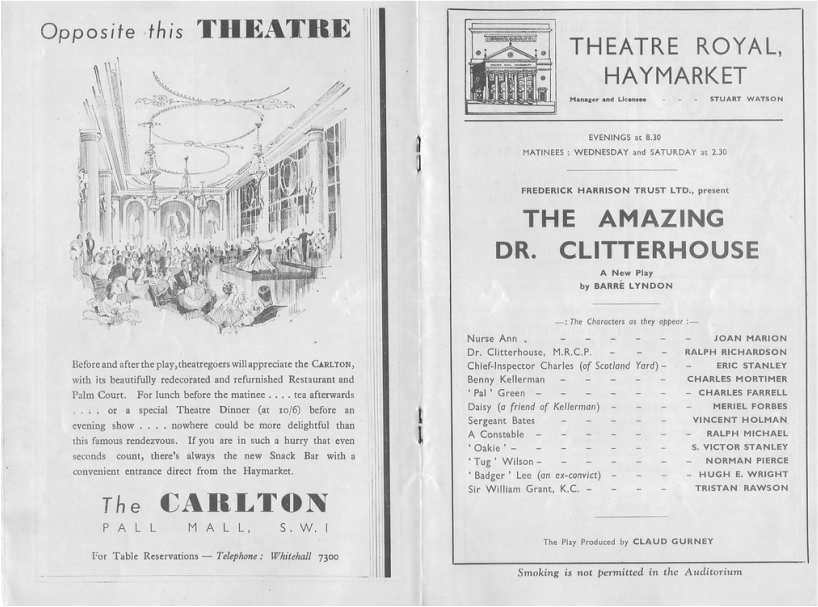 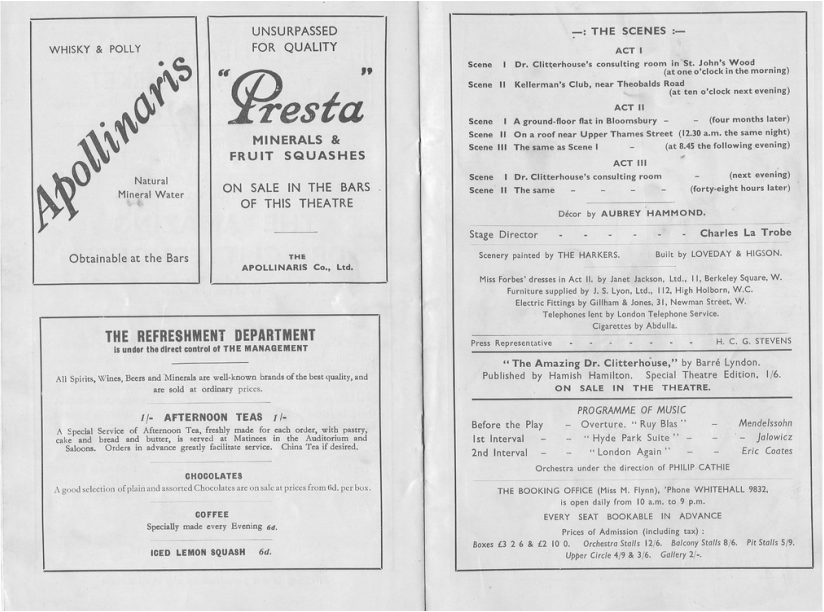 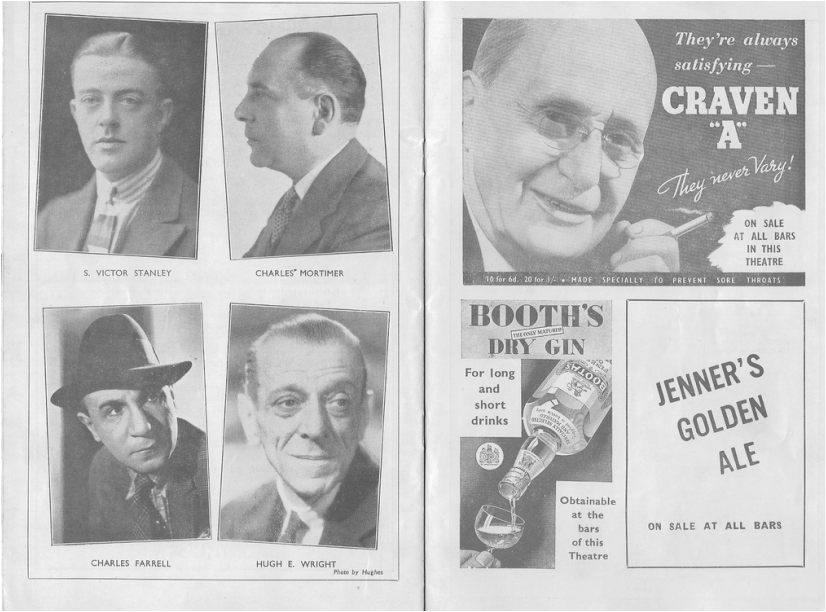 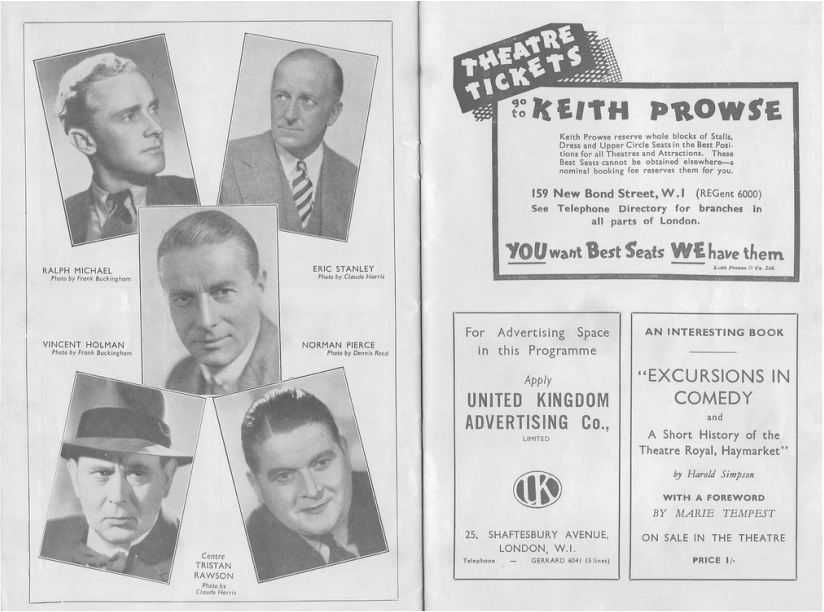 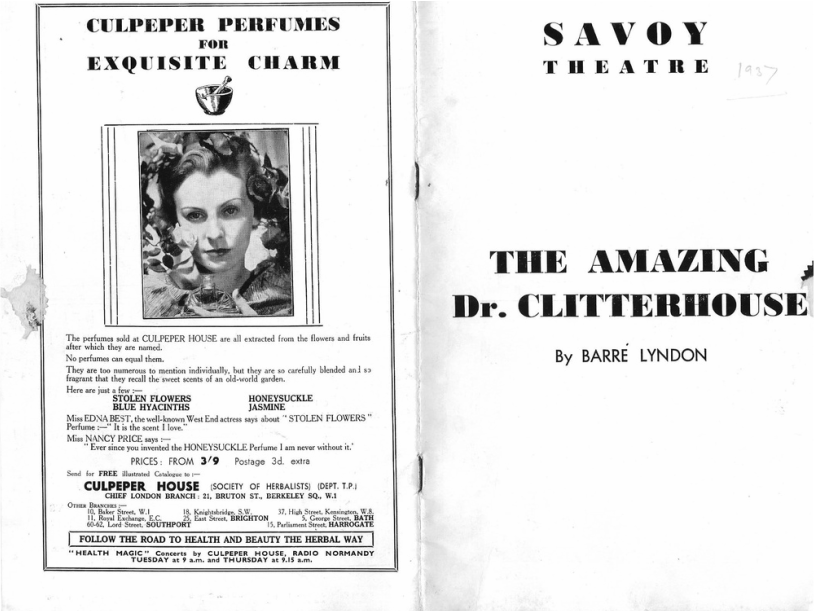 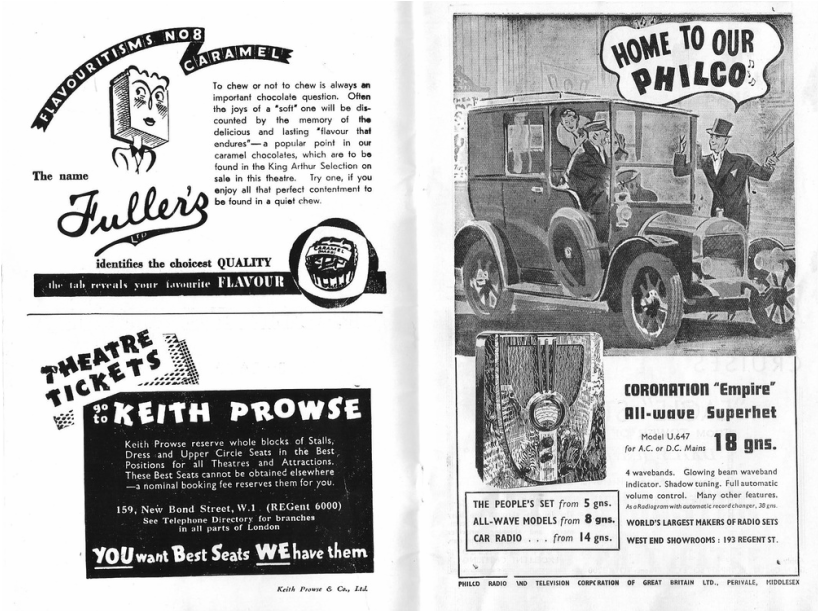 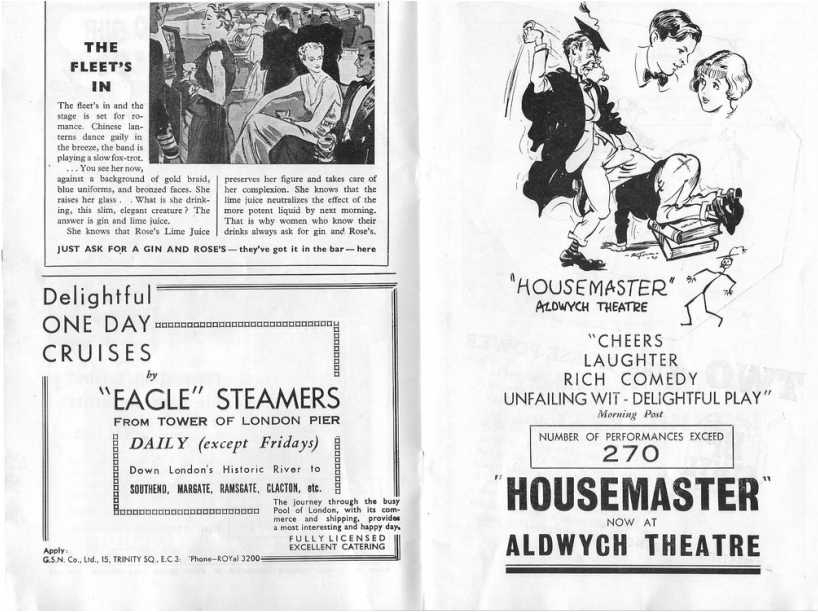 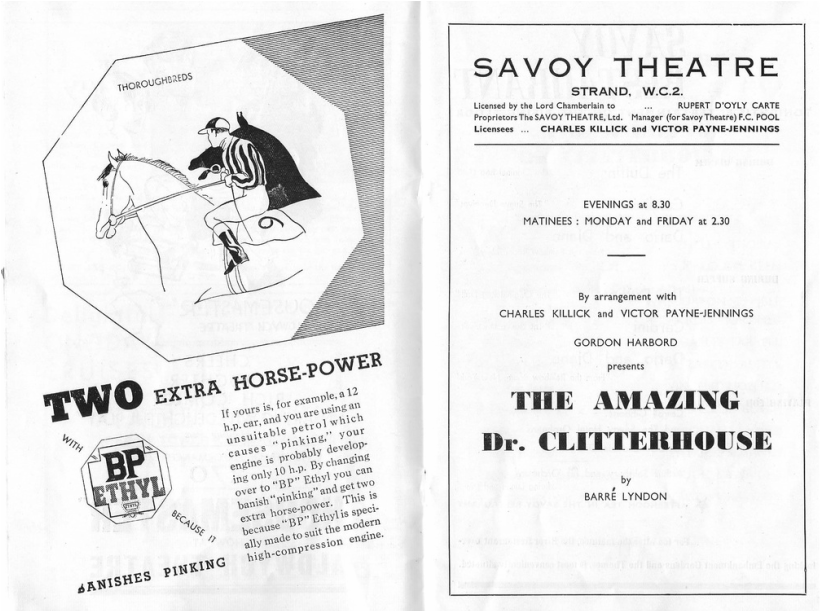 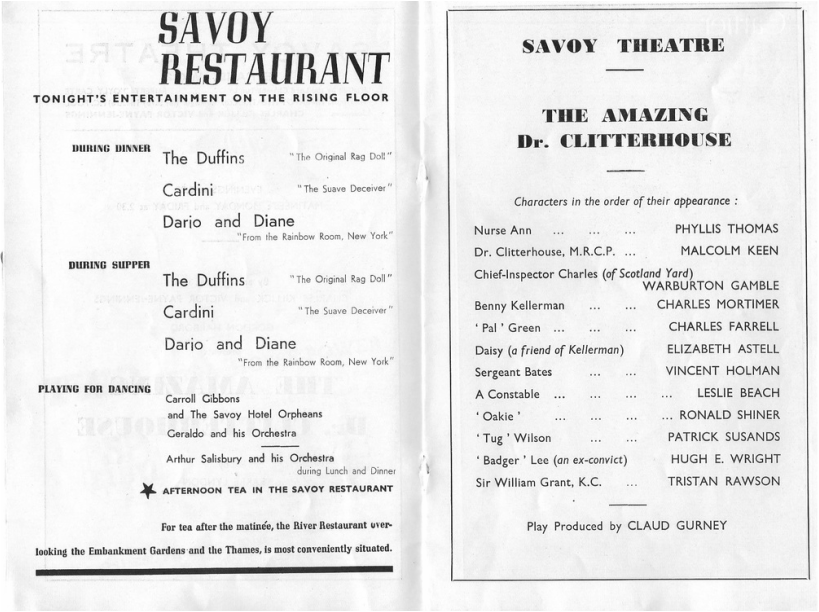 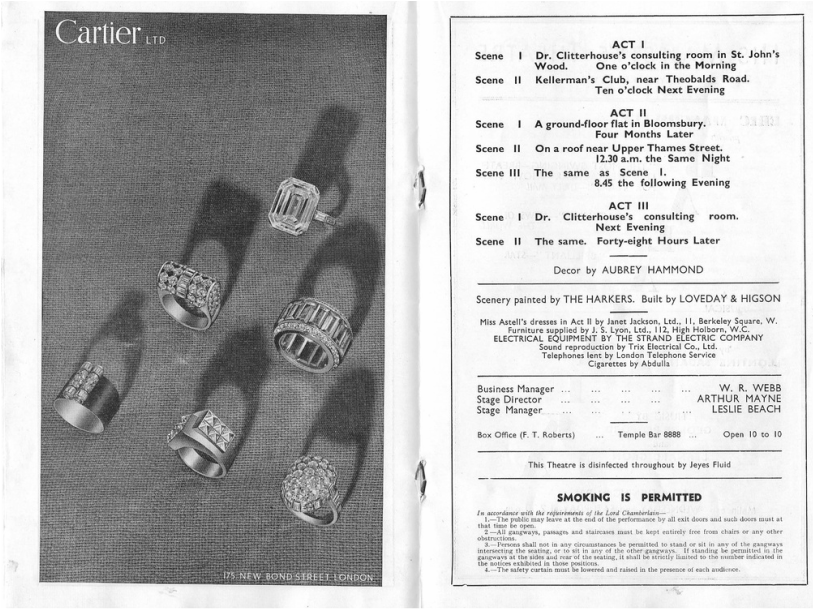 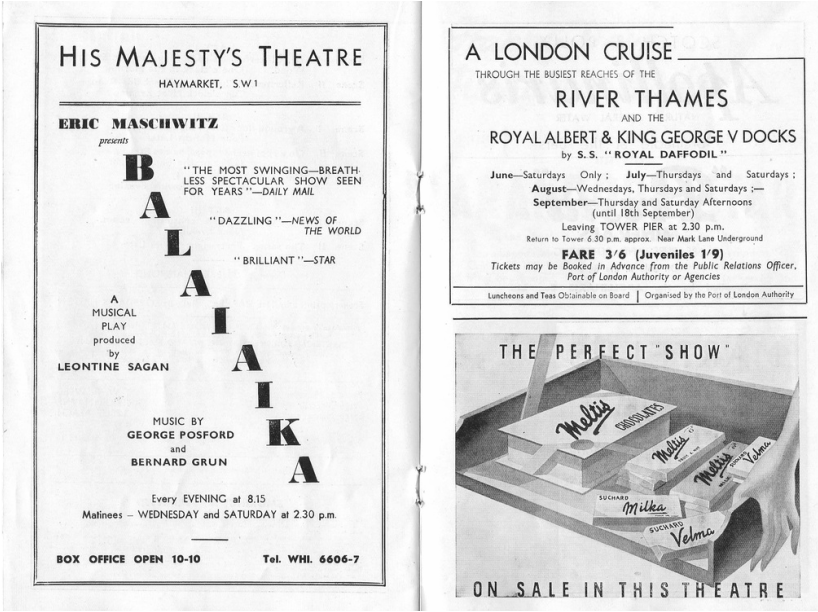 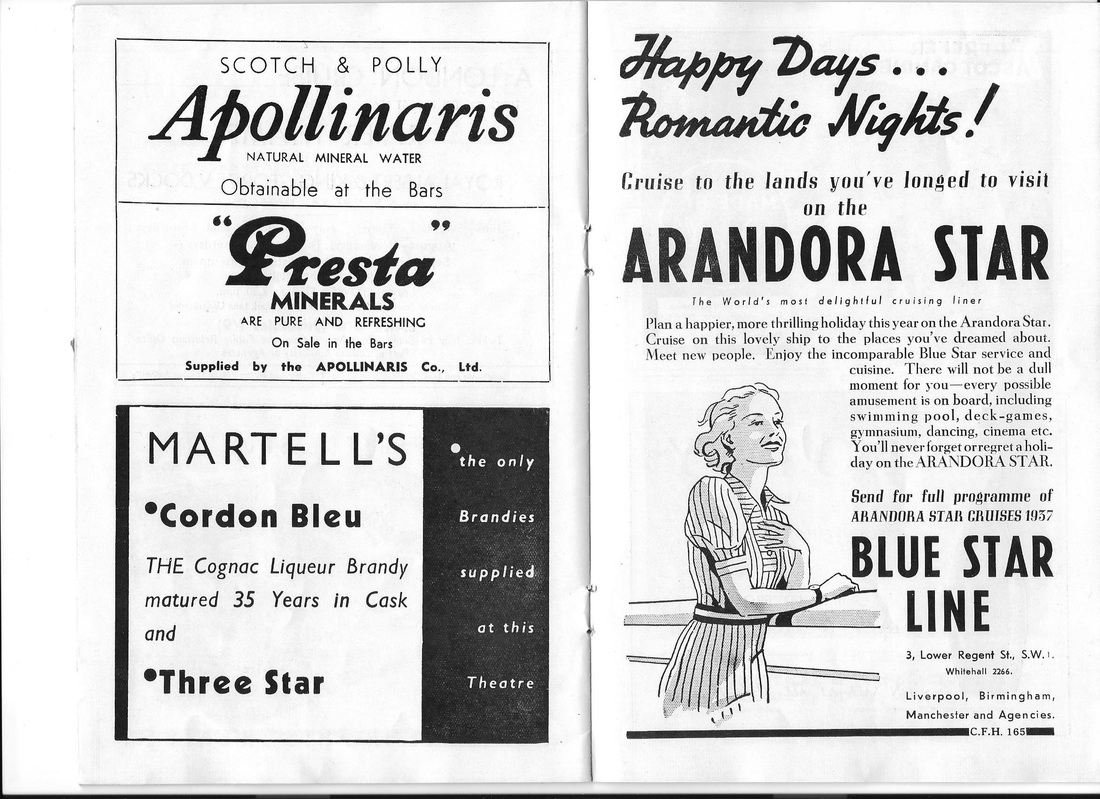 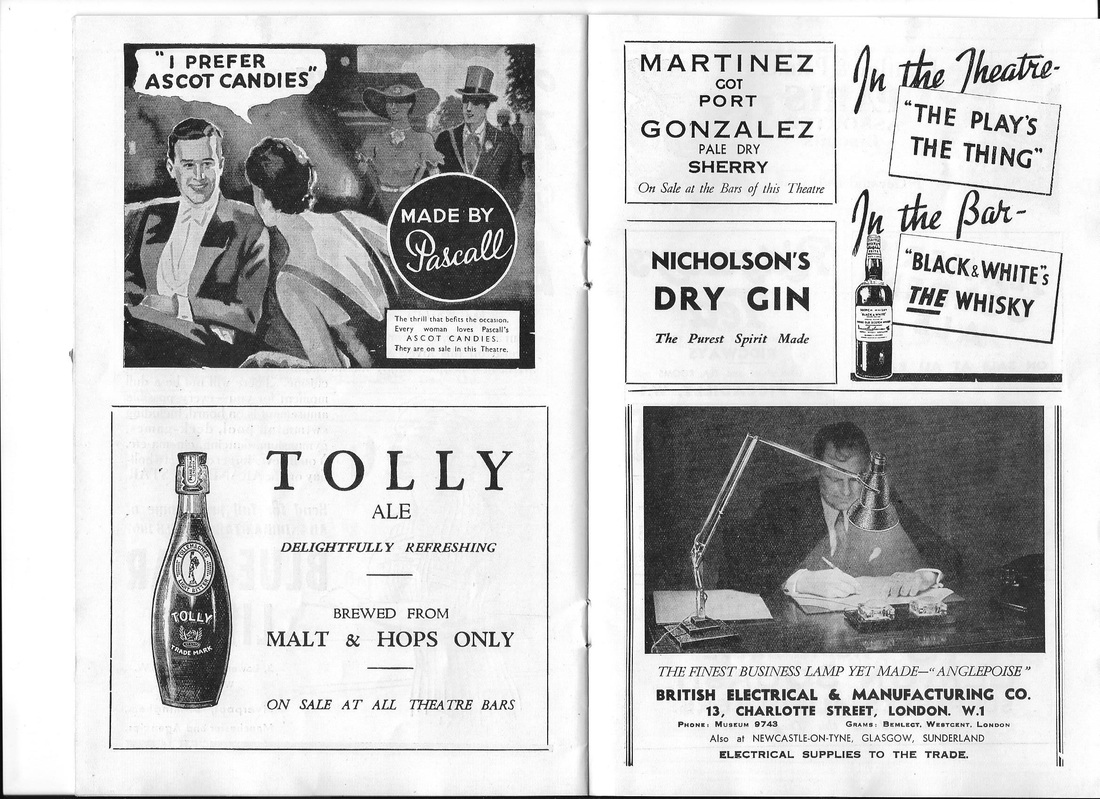 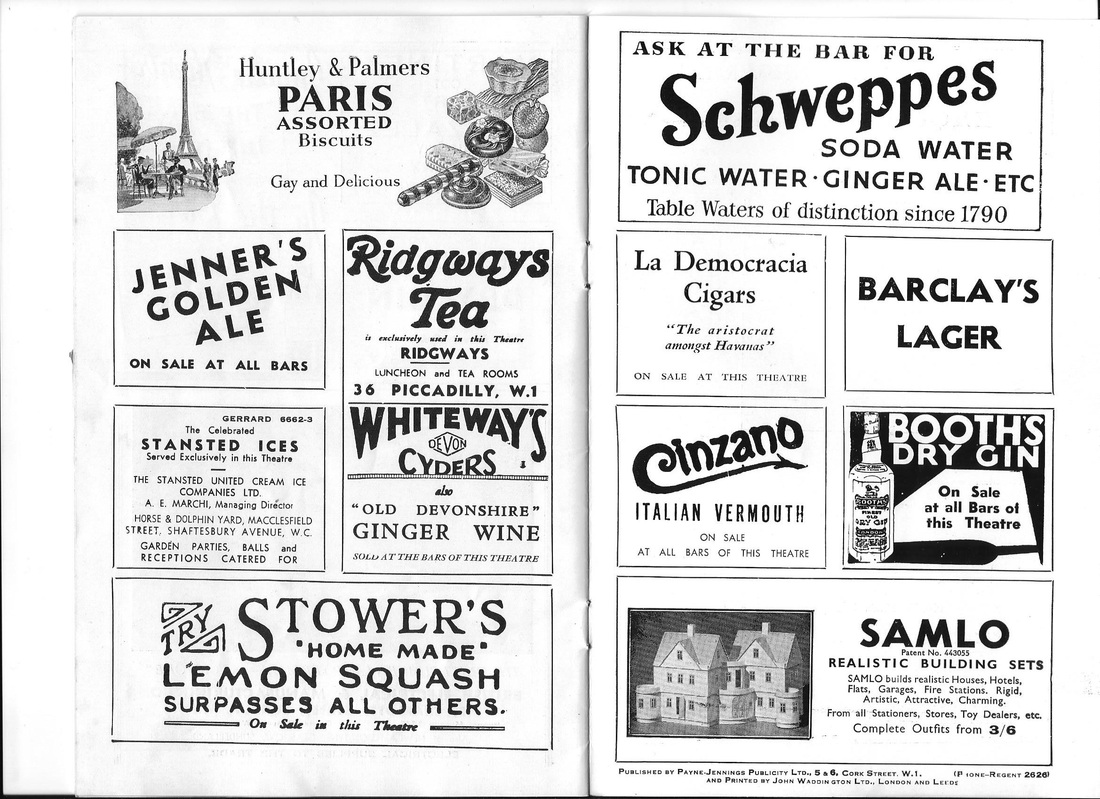