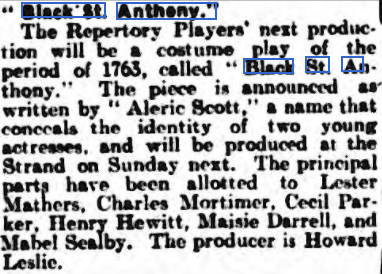 The Repertory Players neat production will be a costume play of the period 1765, called Black St. Anthony. The piece is announced as written by Alecia Scott, a name that conceals the identity of two young actresses, and will be produced at the Strand on Sunday next. The principal parts have been allotted to Lester Mathers. Charles Mortimer, Cecil Parker, Henry Hewitt, Maisie Darrell, and Mabel Sealby. The producer is Howard Leslie.